A Look at Chicago's Pullman Neighborhood Over the Years

In 2015, Pullman drew a lot of attention when President Barack Obama designated part of the Far South Side neighborhood as a national monument. The neighborhood’s striking architecture and decades of history have more than earned the designation. Though the neighborhood is thriving with new development alongside historic buildings, it remains an affordable place to live with a median sale priceof $105,000, according to Neighborhoods.com. Explore the beginnings of the neighborhood and where it is today. 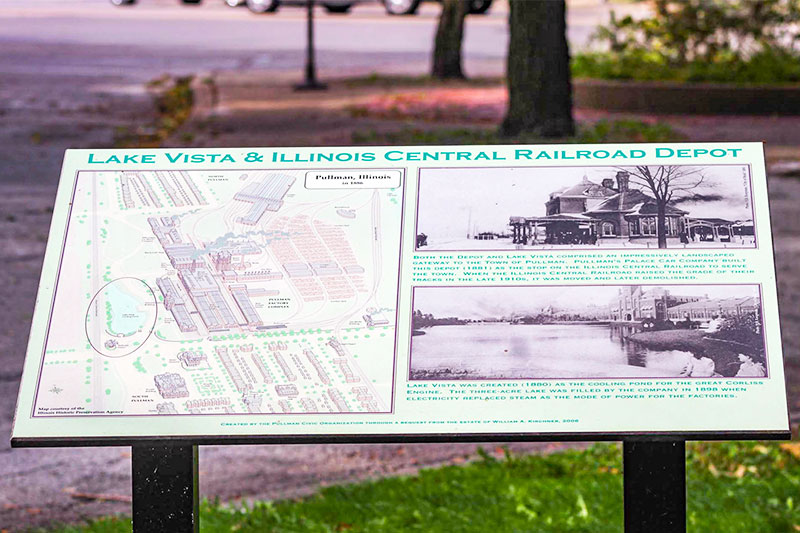 Pullman was the first planned industrial community in the country, according to the National Park Service. American engineer George Pullman created the town in 1880 specifically for the workers building his railcars. The neighborhood’s first homes were row homes and Queen Anne-style.

Though a model idea, no discussion of the town can skip mention of the Pullman Strike, which occurred in 1894 when Pullman cut jobs and wages for the workers living in his town. The town became a Chicago neighborhood when it was annexed by the city in 1907.

Pullman’s rich history and incredible preservation—roughly 90 percent of the community’s original buildings are still standing—led to the Pullman Park district’s designation as a national monument.

“The people who are part of the Pullman legacy helped to shape America as we know it today. Pullman workers fought for fair labor conditions in the late 19th century and the Pullman porters helped advance America’s civil rights movement,” Lynn McClure, Midwest senior director for the National Parks Conservation Association, told the Post. “Thanks to the president, Pullman’s story will soon be remembered and recounted for the millions of people that visit America’s national parks each year.”

Three years later, the Pullman National Monument is moving toward its goals. The National Park Foundation has raised $8 million of its $13 million total goal for opening the monument’s visitor center, according to the Chicago Tribune. Plus, Kathy Schneider, superintendent of the national monument, is working to bring an original Pullman railcar to the site, according to the report.

“We are determined not to open the visitor center without at least one Pullman rail car, here,” she told the Tribune.

While the National Park Service is hard at work preserving the neighborhood’s history, developers are pushing to break ground on new projects. Over the past few years, the neighborhood has had $300 million in economic development, according to CBS Chicago.

New projects on the horizon include the $250 million, mixed-use Pullman Park development. A number of the 180-acre project’s businesses are already open, including a Whole Foods distribution center and urban produce purveyor Gotham Greens. Pullman is also home to a Method soap factory that opened in 2015.

Looking ahead, the CTA’s proposed 5.3-mile extension of the Red Line could mean more development for Pullman. The $2.3 billion project would cut through Far South Side neighborhoods like Pullman, Riverdale, Roseland, and Hegewisch. The project, not expected to break ground until 2022, could cut travel times from these neighborhoods to the Loop in half.

Sports Facilities in the Community

Pullman is set to get two new athletic facilities. The Pullman Community Center, a $20 million, 135,000-square-foot facility, is expected to open this fall, according to RE Journals. Located at 10355 S. Woodlawn Ave., the community center will offer athletic and academic programs for children and adults. The new facility is being funded by grants and donations from several organizations including the Chicago Cubs Charities, Chicago Bears, Chicago Housing Authority, Citibank, Chicago Community Loan Fund, the Illinois Department of Commerce and Economic Opportunity, and more, according to the report.

While the community center is nearing completion, another athletic facility has broken ground in the neighborhood. The Gatley Indoor Track & Field at 744 E. 103rd Street will feature a 200-meter track and seats for more than 3,000 spectators, according to Curbed Chicago.

“This state-of-the-art facility will provide unprecedented recreational and competitive opportunities in Roseland, Pullman and neighboring communities,” Michael Kelly, CEO and general superintendent of the Chicago Park District, said in a statement.