Amazon is Coming to Your Neighborhood, One Way or Another

Last Monday was the first official day of business for Whole Foods as a subsidiary of Amazon and the retail giant wasted little time integrating itself and its services. Not only did the tech giant that was built on good deals start chopping the infamously high prices at “Whole Paycheck” but they set up Amazon Echo displays (in the middle of the produce section for some reason) and Amazon Lockers in select stores as well. Whatever you think of them as an entity and economic force, they certainly earned their reputation for speed and efficiency that day.

The acquisition of Whole Foods is just one of many tactics Amazon is using in order to become your all-in-one source for just about anything you can think of anytime of the day. What has some experts confused about the move is that Amazon already had multiple irons in the fire when it comes to giving customers brick and mortar ways to buy groceries and other goods. How they’ll all come together as a coherent strategy remains to be seen, but perhaps the overlapping blanket coverage that Amazon is bringing to a neighborhood near you is the point for now.

Before Whole Foods came into the picture, Amazon was proceeding with a concept called Amazon Go. The idea is that you walk in, grab the groceries you want, and then walk out without paying a cashier or even interacting with another human being. You simply let the store know you’re shopping via mobile app, and through machine learning and computer vision the store knows what you’ve purchased and charges you accordingly. The company started the concept in Seattle last year and said it had plans to eventually roll out over 2,000 grocery locations. Having Whole Foods in the mix likely changes that, but perhaps we’ll see the two entities integrated with one another.

If you don’t want to deal with the grocery store shopping experience anymore, then Amazon has already tried to appeal to you in two ways. Depending on where you live, you might have seen an Amazon Fresh truck delivering groceries right to a neighbor’s door. In cities such as Los Angeles, San Diego, Baltimore, Sacramento, Dallas, and Chicago, Amazon Prime members just point and click for what they want and wait for the food to come to them.

Also, wouldn’t you know it but Whole Foods 365 label foods are already available through them.

Amazon also knows that you might not be home during the day because you’re busy at the office and don’t have time to trudge up and down the aisles. That’s where Amazon Fresh Pickup comes in. Customers order their groceries online, drive to the neighborhood fulfillment center, pop the trunk, and let someone load the grocery bags into the car. The company is testing out the concept in, where else, Seattle, with locations in the Ballard and SoDo neighborhoods.

Whether you want to shop in a regular store, shop without dealing with people, pick up the groceries in your car, or have them delivered to you, Amazon has literally covered all the bases. They leave us with very few excuses not to use them.

Even then, it’s not just groceries that Amazon wants you to buy. They started with a focus on books, remember? That’s why they’re rolled out a series of brick-and-mortar bookstores over the last few years. While Borders died and Barnes & Noble heads in the same direction, Amazon has been strategically opening stores in major cities since 2015. Starting with Seattle (of course), they’ve since added locations in places such as San Diego, Portland, Chicago, New York City, and Walnut Creek. The stores try to integrate the online experience of visiting Amazon.com with a curated selection of books, as well as all the Amazon-branded gadgets you can imagine (leading some to say it's not actually a bookstore). They even go as far as charging different prices for customers who belong to Amazon Prime and those who don’t. In 2016, an Amazon executive said they planned to open as many as 400 bookstores nationwide but have since backed off that figure. 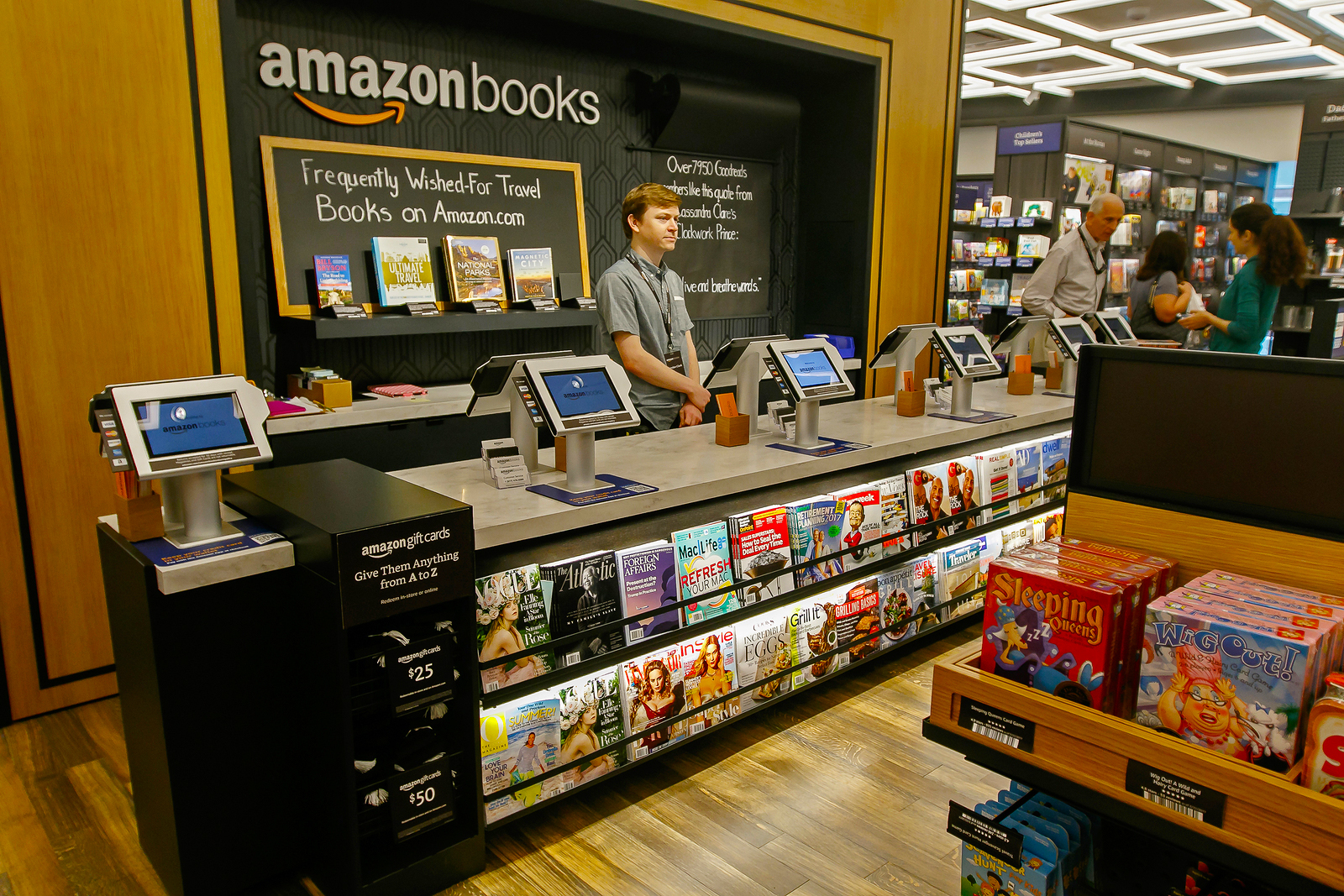 With all of these options, Amazon is ultimately trying to get you to do two things: be an Amazon Prime member and have an Amazon Echo in your house. With that, and when all of their retail offerings are fully operational, you won’t have much reason to ever leave your neighborhood in order to meet the basic needs of life. For some, that may sound like a pretty good deal. For others, it defeats the purpose of, you know, living.

So long as people keep signing up and buying stuff, Amazon seems fine about the moral quandary they’re creating.