Anthem or Seven Hills: Which master-planned community is right for you?

Although some locals consider Anthem and Seven Hills as the same community, these neighborhoods are actually separate master-planned communities located right next to each other.

Curious about what it’s like to live in these master-planned communities? Here’s a closer look at Anthem and Seven Hills. 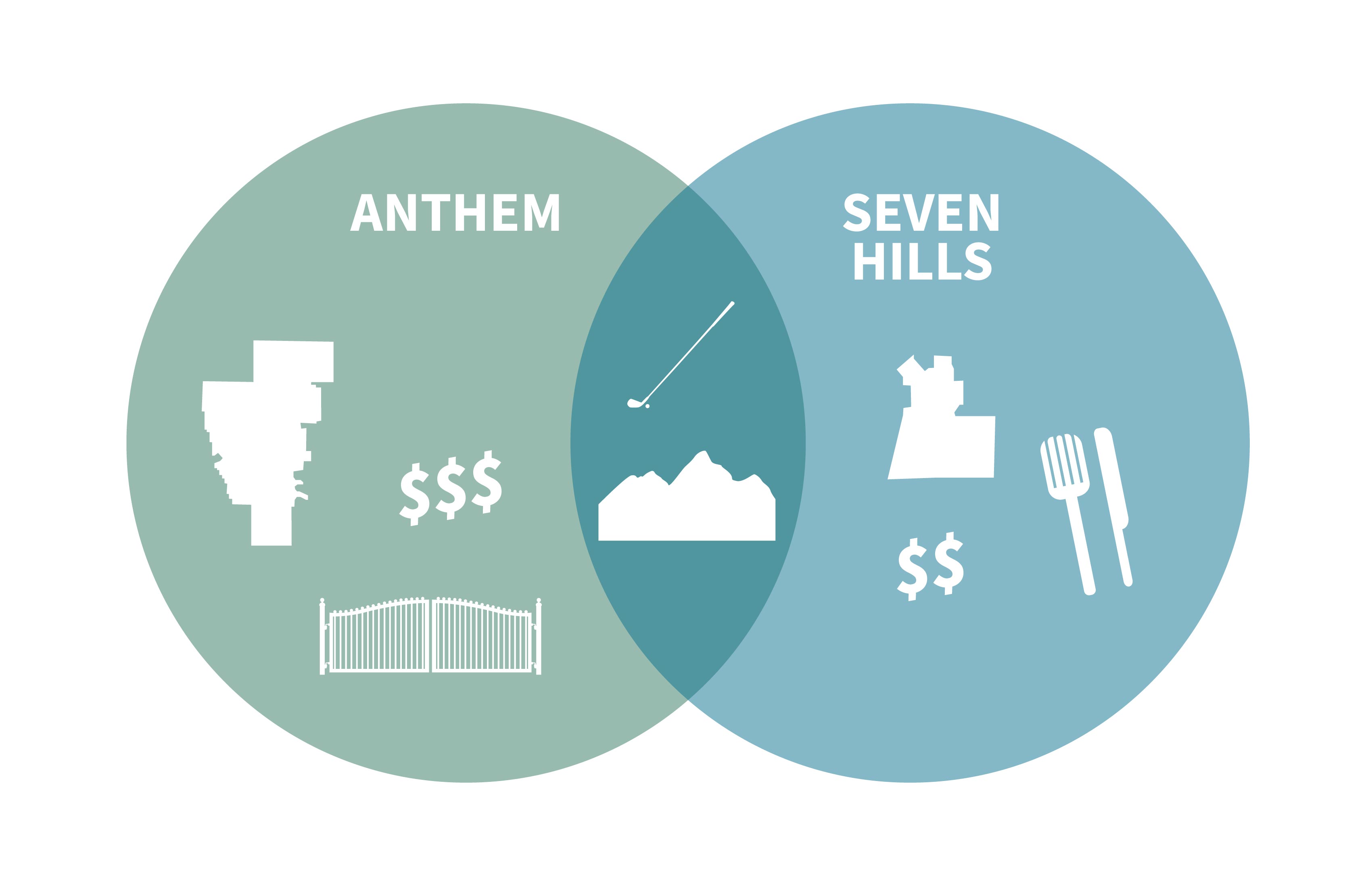 Made up 25 neighborhoods and about 2,500 homes, Seven Hills spans 1,300 acres. This development is situated along the top of the McCullough Mountain Range, which provides homebuyers with scenic views of Las Vegas. In Seven Hills, homes are slightly more central, with easy access to grocery stores and eateries like Bad Owl Coffee, Craft Kitchen, and Hummus Bowls and Wraps.

Anthem is much larger than Seven Hills, spanning 4,755 acres and including more than 10,000 homes. Built by Del Webb, the community is situated at the base of the Black Mountains and made up of several neighborhoods that range from multi-generational housing to active adult living. Some popular neighborhoods in Anthem are Sun City Anthem, one of the largest 55+ communities in Henderson, and Anthem Country Club, a guard-gated luxury golf club community.

Anthem has more guard-gated communities surrounded by local parks and open greenspaces. Still, residents find that some local parks, like Sonata Park and Vivaldi Park, overlap the two neighborhood boundaries and tend to be shared by both Anthem and Seven Hills residents. Residents in Anthem also have to drive a bit farther to access restaurants and grocery stores.

While both communities offer views of The Strip and the Black Mountains, residents will likely find these features more in Anthem simply because the community is higher in elevation.

In Seven Hills, the median sale price hovers in the mid $300s, while in Anthem, it’s closer to the high $300s. In these communities, homebuyers can find mostly single-family homes priced in the low $300s to the high $700s. Buyers can easily find homes built in the last five years, and the oldest home in both of these communities dates back to the 1990s.

In Anthem and Seven Hills, it’s also fairly easy for homebuyers to find mansions and custom estates priced in the millions, some of which are occupied by celebrities like famous magician Criss Angel or eBay founder Pierre Omidyar. Homes located around the popular 18-hole Rio Secco Golf Club in Seven Hills, which is also home to the Butch Harmon School of Golf, can go into the millions.

In Anthem, homeowners have a wide selection of amenities and recreational facilities to choose from such as community parks and trails like Anthem Hills Park or Anthem East Trailhead, while Seven Hills residents can walk, bike, or hike the community’s trailhead. Seven Hills also provides homeowners with plenty of outdoor facilities such as basketball courts, tennis courts, playgrounds, and neighborhood parks.