The plan to modernize the North Branch stretch of the Chicago River that sits between Lincoln Park and Wicker Park is finally approved despite backlash from the community. Garnering criticism for adding to traffic congestion and not including a much-needed park, the Chicago Plan Commission unanimously approved the North Branch Industrial Corridor Modernization Plan on May 18.

The approval of the plan means 760 acres of protected industrial property will now be open to commercial and residential development. In the guidelines to the redevelopment of the area, 50 percent of the land will be open for “non-employment” use.

With the approval of the plan, the land is expected to increase exponentially in value. This could impact current businesses in the area, as land values are likely to outpace the value of some small businesses. Ald. Tom Tunney (44th), a Plan Commission member and owner of the Ann Sather restaurants, believes the plan could create a “land rush” in the North Side.

Michele Smith, 43rd Ward Alderman, was the leading voice of the opposition due to the lack of a large-scale park in the plan. The plan does include an extension of The 606 trail and a riverfront park ideal for running, walking, and cycling.

“We face a period of unprecedented growth. … The land rush is on in this area. Billions of dollars of investment are expected. With a master plan for this significant development, this would be the opportunity to correct and plan for the park deficits that exist,” Smith argued, according to the Chicago Sun Times.

The corridor is the first of 26 to be considered for modern updates and rezoning. 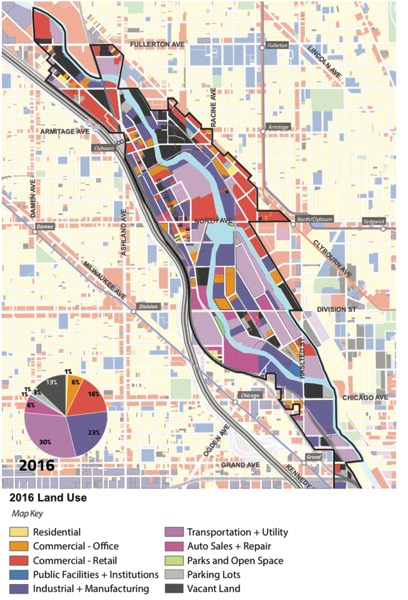