When considering a new home, you’re often presented with a series of options meant to make your living experience unique. Depending on the community and budget, however, those options are often limited.

These are all reasonable options, but they’re also the same choices that everyone else in the neighborhood is making. You don’t want to be like everyone else. You’re looking for something unique that makes your home stand out. Something that starts a conversation when friends come by.

Whether you’re looking at a custom home or a master-planned community with flexible floorplan design, here are four unique rooms worth considering to make your house just a little bit different.

Now, your first thought when someone asks if you want a “messy kitchen” in your house is that you already have a messy kitchen. It’s called the kitchen.

But we promise, there’s actually a difference here. Open-concept kitchens are pretty standard these days, especially in custom builds. But the problem with an open kitchen is that they make it very hard to keep messes hidden.

Per Builder, rather than adding more space to the main kitchen to deal with the problem, Ohio-based custom builder Schumacher Homes came up with a better solution. A hidden prep kitchen called the “messy kitchen.”

But isn’t that just a butler’s pantry? Schumacher makes a delineation between the two, saying a pantry is usually close to the dining room and designed formally, whereas the messy kitchen is meant to be an extension of the kitchen tucked away so that you can leave the dirty dishes out without worrying if guests are rummaging around in the mess.

Schumacher’s newest models that include messy kitchens incorporate full kitchen cabinetry, refrigerator, sink, dishwasher, and built-ins. They also allow for customization to remove some of those components if the buyer doesn’t think they need all of it in this auxiliary kitchen.

Feeling comfortable in your own home is one of the basic hopes we have of any place we live. That’s often summed up by the notion of getting home, getting into some comfortable jammies, and relaxing on the couch. But depending on your living situation, that might not be possible in the traditional sense. Someone’s always hogging the TV while someone else won’t stop making noise in the basement or playroom. How are you supposed to chill out around here?

That’s where the pajama lounge comes in. Ostensibly, this is a casual living room with TVs, couches, video game systems, and other tech toys that are often found in an upstairs open space near the bedrooms. Paul Fischman, principal designer at Choeff Levy Fischman, told Realtor that these rooms are “designed to be a place where the family can gather and hang out away from the high-traffic areas of the home."

The pajama lounge also acts as a good space upstairs for kids or introverted adults to hang out when you’re entertaining guests down below.

Pajama lounges have gained popularity in recent years as part of a larger trend to move living areas upstairs. According to the Wall Street Journal, developers and architects are being asked to take these formally empty spaces and turn them into “healing chambers” away from the busy first floor where family members can relax (or get away from other family members in order to relax). 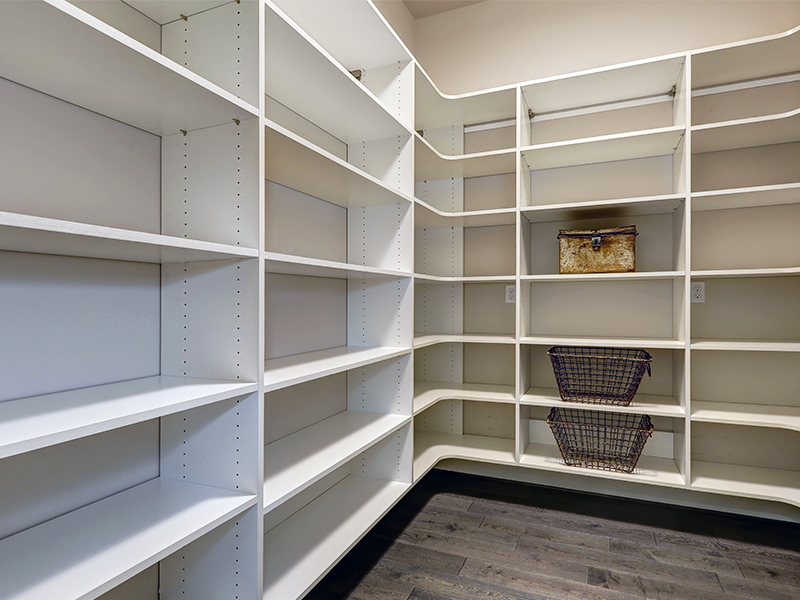 On paper, that sounds like a dangerous proposition. A room in your house that is also a Costco? You’ll never want for pretzel kegs or bulk salmon steaks again!

But no, the “Costco room” isn’t your own personal wholesale warehouse. Instead, it’s the room in your house where you stash everything you bought from the wholesale warehouse. Lord knows that an effective shopping trip to Costco (or Sam’s Club or Target) can leave with a whole lot of bulk items and nowhere to put them.

That’s where the Costco room comes in. This pantry-style room is situated between your garage or carport and kitchen, allowing you to easily drop and drag everything from the car without ending up with overflowing cabinets or overwhelming messes.

Per the Chicago Tribune, the rooms are also said to be borne out of a desire by many to use the kitchen more often without giving up precious space to storage.

If there are just two of you living in the house, you probably aren’t buying enough bulk to need something like this (we hope?). But if you’re a family of five or six and can’t keep up with the constant bulk buys of toilet paper, cat litter, and mac and cheese, then a dedicated room to keep all these large packages suddenly sounds pretty handy.

Hidden passageways. Secret rooms. Panic rooms. Whatever you want to call them, there’s more of a demand for these kinds of secretive additions to custom homes than you might imagine. In fact, companies like Creative Home Engineering have made a business out of installing hidden doors, secret rooms, and trapdoors in homes.

Look, whatever you want to do with a hidden room is entirely up to you, Christian Grey. But these rooms aren’t always about kinky secrets. In fact, according to CHE founder Steve Humble, most of their hidden passageways lead to home theater rooms, offices, private studios, and kid’s playrooms.

If you’ve ever dreamed of being able to pull a fake book and watch a bookcase open up, that’s something they can do. They can also use items such as full-length mirrors, fireplaces, or brick walls as the way inside as well. As for how they open, Humble says “the activation method can be anything the client wishes; iPad control, hidden button, remote control, twisting a candlestick, hidden fingerprint scanner, pulling a book – you name it.”

Of course, this kind of design doesn’t come cheap. These customized secret rooms cost about $7,500 on average, while the more complex designs can run as much as $12,000.