Is 2018 finally the year for Uptown revitalization?

Last year was a big one for the northside neighborhood of Uptown with the opening of the remodeled Wilson CTA Red Line station, the handful of proposed and in-progress residential towers, and the opening of a two-way bicycle route called the Glenwood Greenway.

Despite what looks to be a complete turnaround for Uptown, the community still has some hurdles to jump over to compete with its neighbors to the north, south, and west.

At the start of the year, the 46th Ward Alderman James Cappleman announced that at least four transit-oriented developments are expected to break ground throughout 2018. According to Curbed Chicago, the projects will result in an additional 575 units in the neighborhood.

Located at the corner of Wilson Avenue and Sheridan Road, 975 W. Wilson Ave. is the tallest project expected to take shape. The 12-story development will have 150 units, ground-floor retail, and a 29-car parking lot. A nine-story building will be just a few blocks west at 4601 N. Broadway St., and its expected to start to take shape in the first quarter of this year. The building, at Broadway and Wilson, will have 197 rental units and 11,500 square feet of retail space.

Approved by the Chicago Plan Commission in May 2015, a seven-story, 110-unit building at 1050 W. Wilson Ave. is finally expected to see construction start this year. Still, the same team that brought the FLATS-brand apartments to fruition may not see this project start until the end of the year.

The final building planned for Uptown is on its border with Lakeview. The seven-story, transit-oriented project will deliver 120 rental units and 16 parking spaces. Work is expected to begin on the project at 3921 N. Sheridan Road in the second quarter of the year.

Revitalization of Uptown’s Most Iconic Theater Continues to Stall 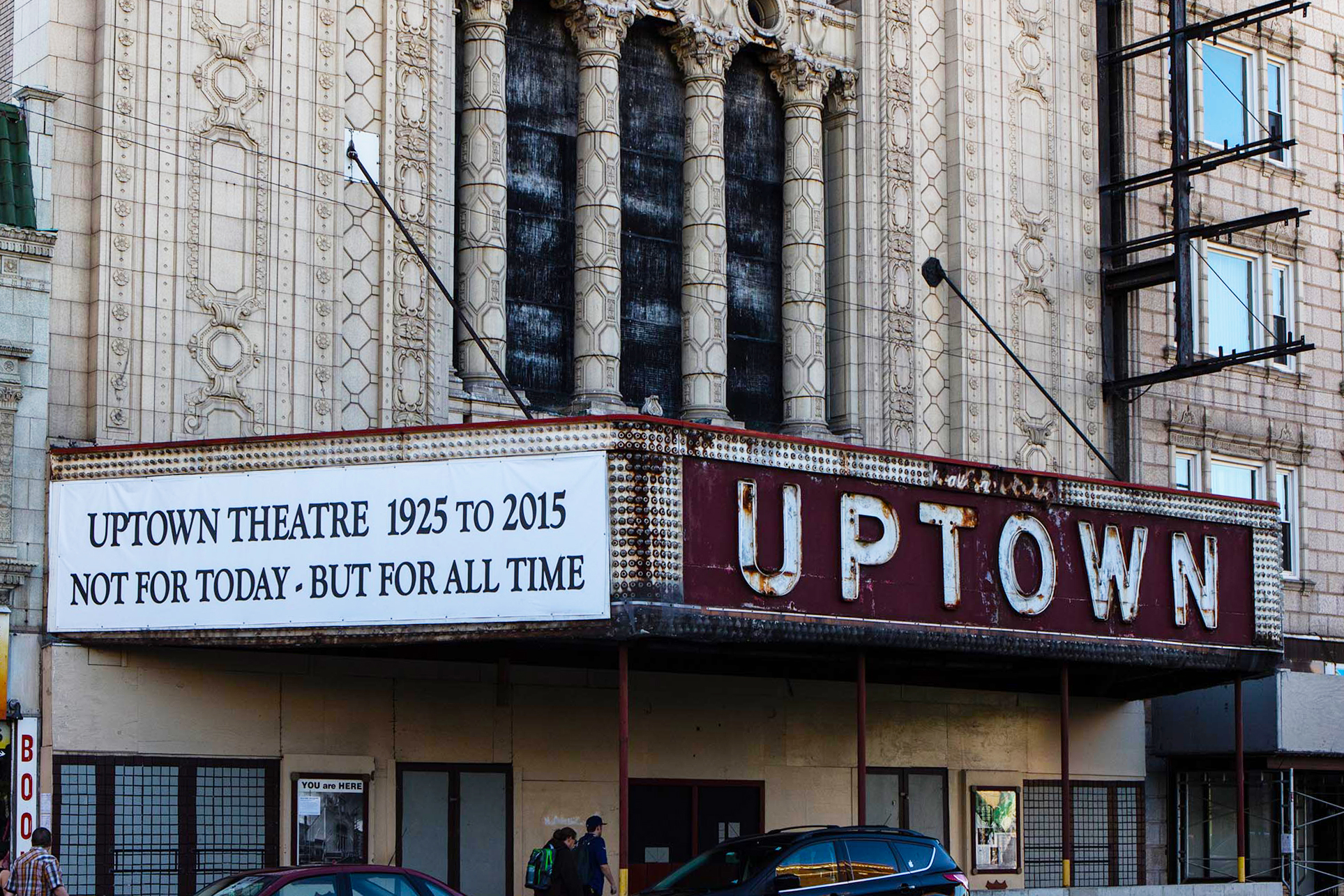 In December 2016, 42 buildings in Uptown were approved to become an official Chicago Landmark District by the City Council. Located around the intersection of Lawrence Avenue and Broadway Street, the cluster of protected buildings that were given landmark designation include the Uptown Theatre, Riviera Theater, Aragon Ballroom, Broadway-Lawrence Building, Leland Hotel, Wilson Avenue CTA, and more.

The Commission on Chicago Landmarks said in a press release that the area is “considered one of the best-surviving commercial and entertainment districts developed in Chicago in the early part of the 20th century.” The landmark designation protects the exteriors of the buildings from alteration or demolition.

While the Uptown Theatre made the list of protected buildings, the problem isn’t protecting it from demolition — it’s renovating it to save it from permanent ruin.

The Uptown Theatre has been shuttered for nearly 40 years, but after Mayor Rahm Emanuel was first elected in 2011, locals were told that the wait was nearly over. Emanuel spoke publicly about his intentions to create an Uptown music district that includes the Riviera Theatre, Aragon Ballroom, the Green Mill, and the shuttered Uptown Theatre, according to Crain’s Chicago Business. He founded a public-private nonprofit called the Chicago Infrastructure Trust (CIT) and announced that Uptown was a priority project.

The long-abandoned building has potentially the largest capacity north of downtown — 4,500 seats compared to the 4,000 at the Auditorium Theatre in The Loop — and could be host to concerts, movies, dining, and more. In January 2015, CIT planned to purchase the theater from Jam Productions for $5.6 million, which would aid in securing city, state, and federal financing to restore the continually disintegrating building.

Mayor Emanuel’s plan is no longer a hope for resolution. The entire CIT staff was replaced in the summer of 2015, which dissolved the chances of funding approvals. Hope for renovations got even further out of reach after Gov. Bruce Rauner went into office and the 2015 bill allocating $10 million in grant funds for the Uptown renovations dissipated.

Preservationists told Crain’s that if it isn’t saved soon, it might end up in permanent ruin. In August 2017, preservationists created a petition to get the attention of elected representatives to prioritize the theater’s restoration. As of January 2018, the petition had 8,787 signatures on change.org.

The effort is supported by the Preservation Chicago and Friends of the Uptown Theatre. The goal is 10,000 signatures.