When I first moved to D.C. over 20 years ago, the city would never have been called bike friendly. The lack of a vibrant neighborhood culture led to a neglect of the city’s transportation infrastructure. Since the 1990s, the accommodations provided for cyclists by the city’s government have been substantial and resulted in a massive increase in bicycling, making D.C. one of the most bike-friendly cities in the country.

The city now features 40 miles of bike lanes and more than 800 miles of biking trails in the surrounding area, as well as at least twelve local bicycling clubs. Capital Bikeshare is the local self-service bike rental program, and the Washington Area Bicyclist Association (WABA) serves as a lobbying organization for cyclist rights and even provides a bike valet service during events such as the National Cherry Blossom Festival. Finally, the city government provides multiple bicycle maps of the city, as well as information on bicycle parking, lanes, and laws. In short, the D.C. bicycle scene of 2017 is far cry from where it once was, and it’s all for the better.

Although the bicycling infrastructure has improved dramatically in recent years, some neighborhoods have received more attention than others. According to a recent poll, five neighborhoods stand out as the most bike-friendly neighborhoods in D.C.: 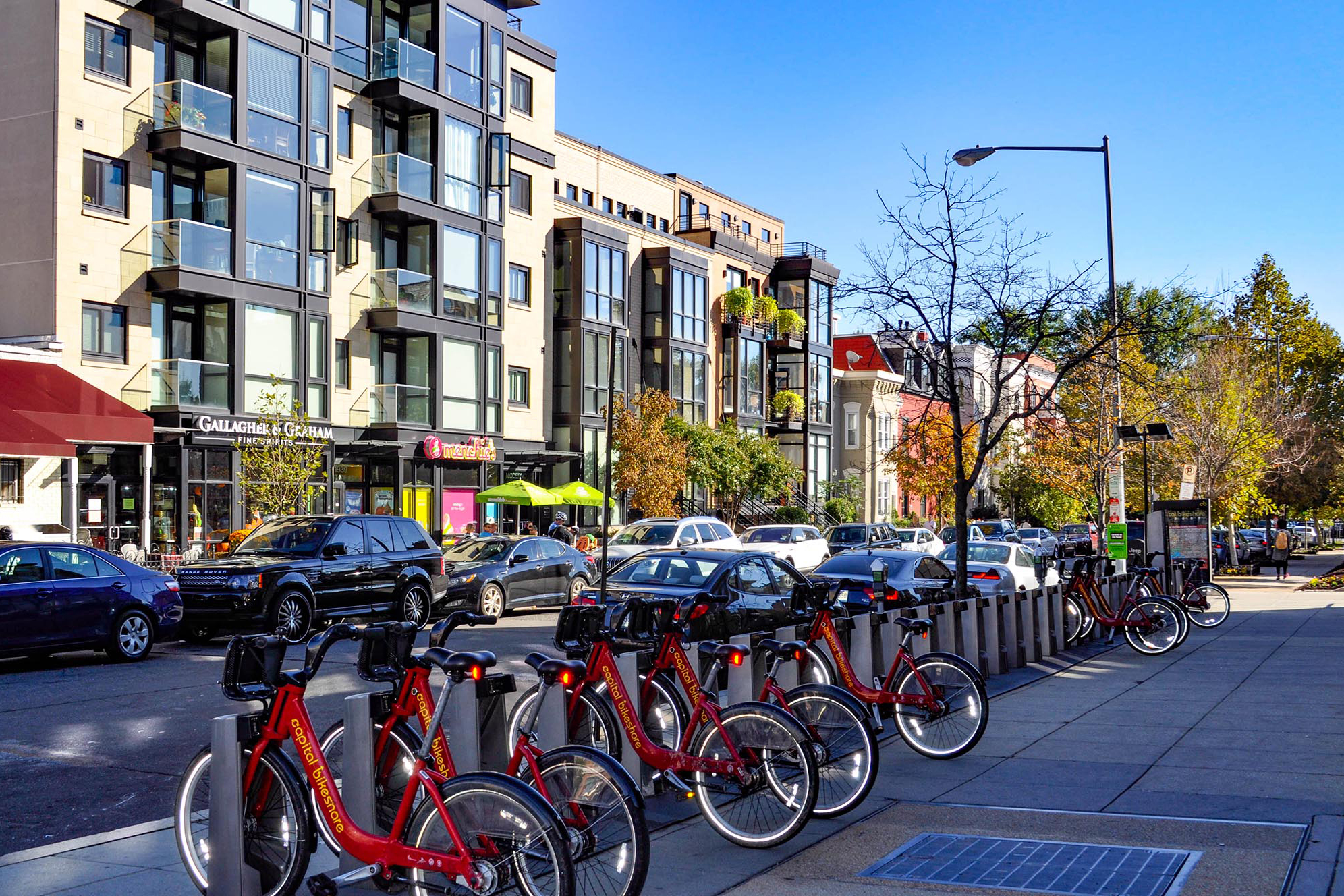 Filled with Victorian-era row houses, U Street Corridor has experienced a renaissance in the last decade. A Jazz Age rival to Harlem for the country’s entertainment superstars, the U Street Corridor was the childhood home of Duke Ellington, location of the Washington Senators’ Griffith Stadium from 1911 to 1963, and is host to both the Lincoln and Howard Theatres. Today’s U-Street is loaded with shops, restaurants, Victorian bike shops, and, of course, bike lanes.

Logan Circle is yet another area that has undergone dramatic changes in recent years. Logan Circle was once home to an army barracks as well as a refugee camp for freed slaves and was not heavily developed until the 20th century. Logan Circle is now home to many historic monuments, a vibrant nightlife, art galleries, shops, and restaurants, and is judged to be the second-best place to get around on a bike in D.C.

Capitol Hill is the largest historic residential neighborhood in D.C. and is situated directly behind the United States Congress. The area is listed with the National Register of Historic Places as one of the largest historic districts in the U.S., and is home to several national monuments. A bucolic, leafy neighborhood known for its architectural variety, the wide streets afford plenty of space for bike lanes, while the local cafes, shops, and restaurants make for a wonderful place to browse.

DuPont Circle’s Bohemian culture led to it joining The Castro, Greenwich Village, and West Hollywood as one of the nation’s earliest LGBQT neighborhoods. Once one of the few areas for nightlife in the city, DuPont Circle still retains its party atmosphere at night, but is also one of the more culturally electric areas of the city during the day as well. 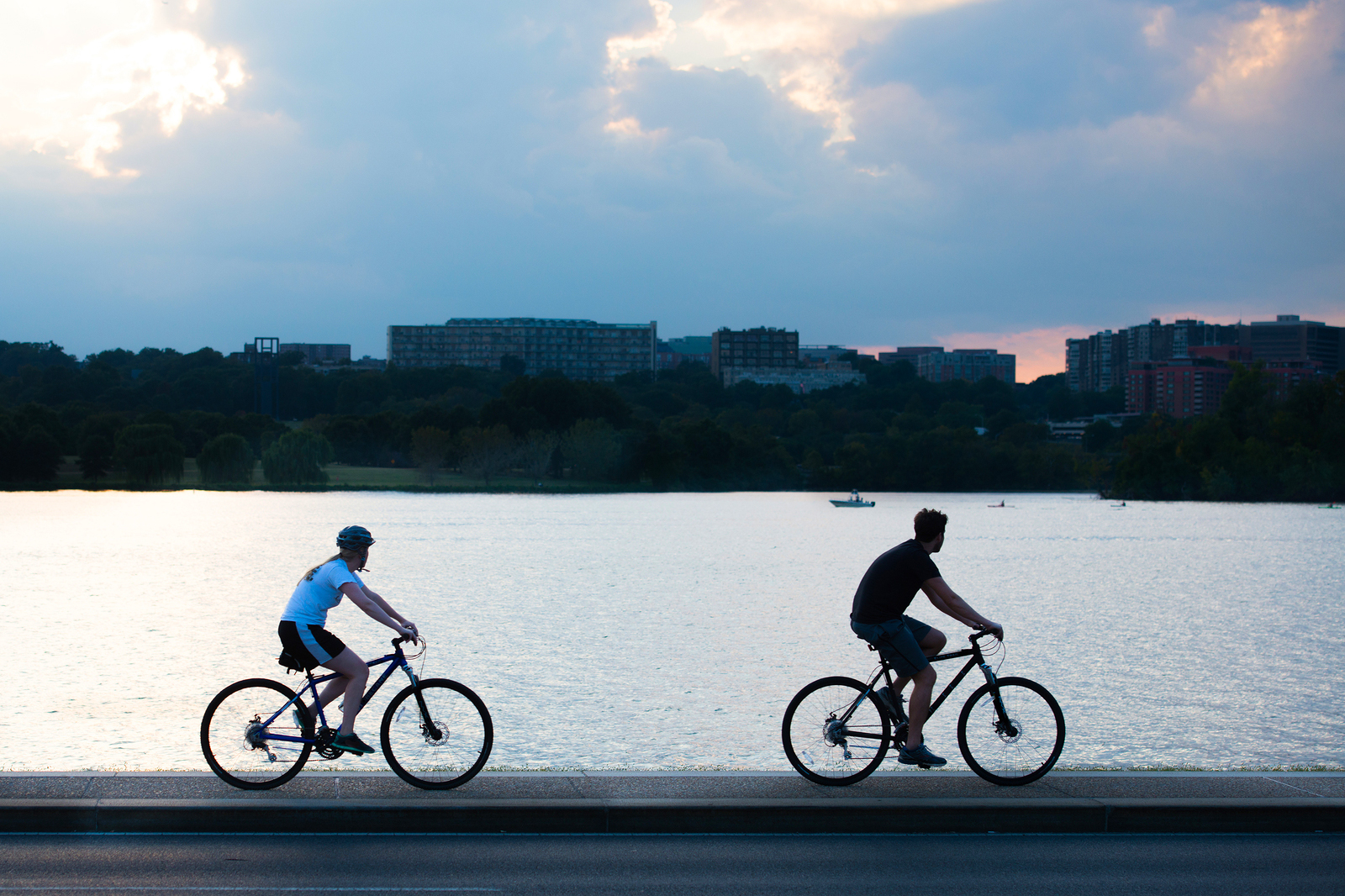 One of the newest areas to see rapid development, Navy Yard has benefitted immensely from the 2008 arrival of baseball’s Washington Nationals. While the area is still very much under development, there are currently plenty of accommodations for bikes.