The Best Chicago Neighborhoods to Live in Without a Car

Chicago is one of the most walkable cities in the country. Thanks to the city’s extensive public transportation network, its miles of biking paths, and overall layout, residents of the Windy City can often ditch car ownership and parking hassles in favor of heading to the nearest ‘L’ station, using the city’s bike lanes, or by simply walking.

There are three generally agreed-upon metrics for determining an area’s walkability: Walk Score, Bike Score, and Transit Score. We took all three scores for each Chicago neighborhood and averaged them to determine which neighborhoods are best for kicking your car to the curb. Here are the ten best Chicago neighborhoods for people looking to easily move around the city without owning a car. 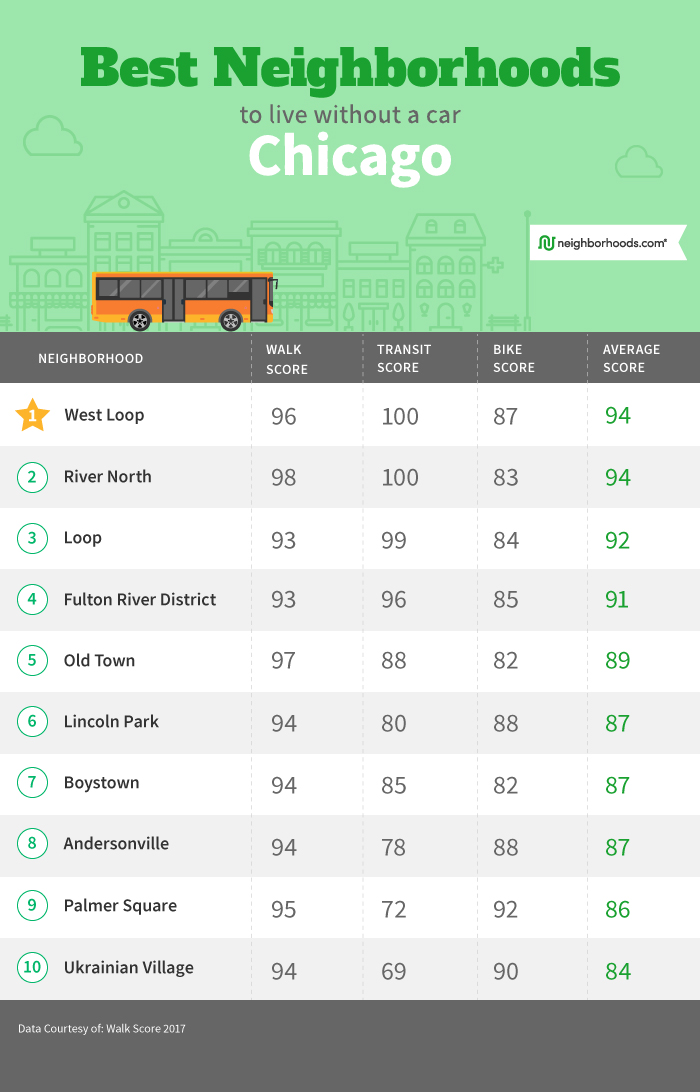 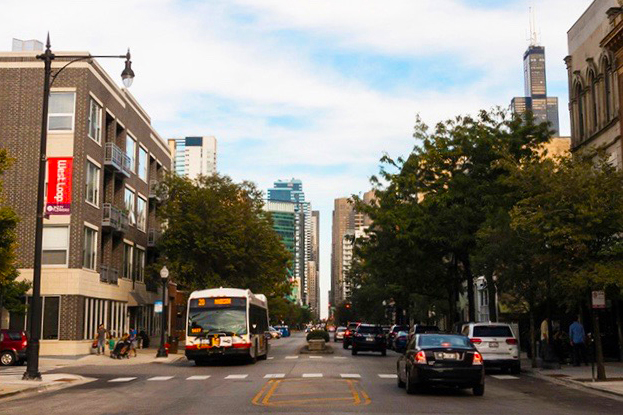 Chicago’s West Loop is ideally located for avid pedestrians. For people who work in the Loop, your commute could simply be an invigorating walk. This neighborhood also has easy access to plenty of public transit options. Hop on the Green or Pink Line at the Clinton ‘L’ station, which will take you to the Loop or the West Side. The Washington/Wells stop offers access to the Brown, Orange, Pink, and Purple lines. The Grand Blue Line stop is also within walking distance and will take riders all the way to O’Hare International Airport.

When you are looking for places to eat and shop, you won’t have to travel far. The West Loop is home to the city’s famous Restaurant Row and a sizeable collection of boutique shops. 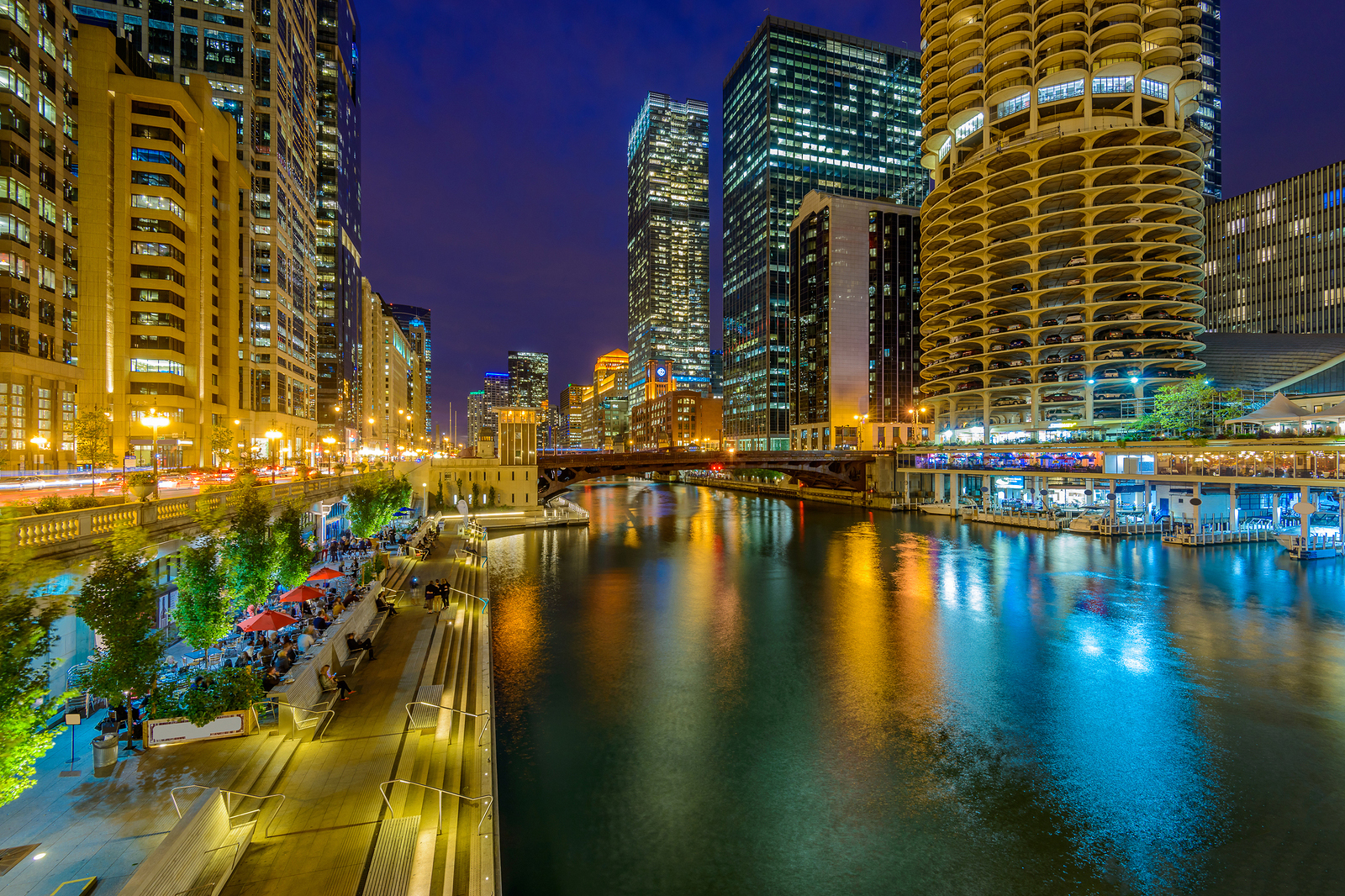 A short walk across the Chicago River from the Loop will bring you to the glitzy, Near North neighborhood of River North. Given its proximity to the West Loop, residents of River North also have access to the Clinton, Washington/Wells, and Grand ‘L’ stops. The Green, Pink, Brown, Orange, Purple, and Blue Lines can get you practically anywhere you need to go in the city.

Living in River North also puts you within walking distance of tons of restaurants and entertainment. Stroll over to Magnificent Mile or stay right in River North for a ton of different restaurant and nightlife options. 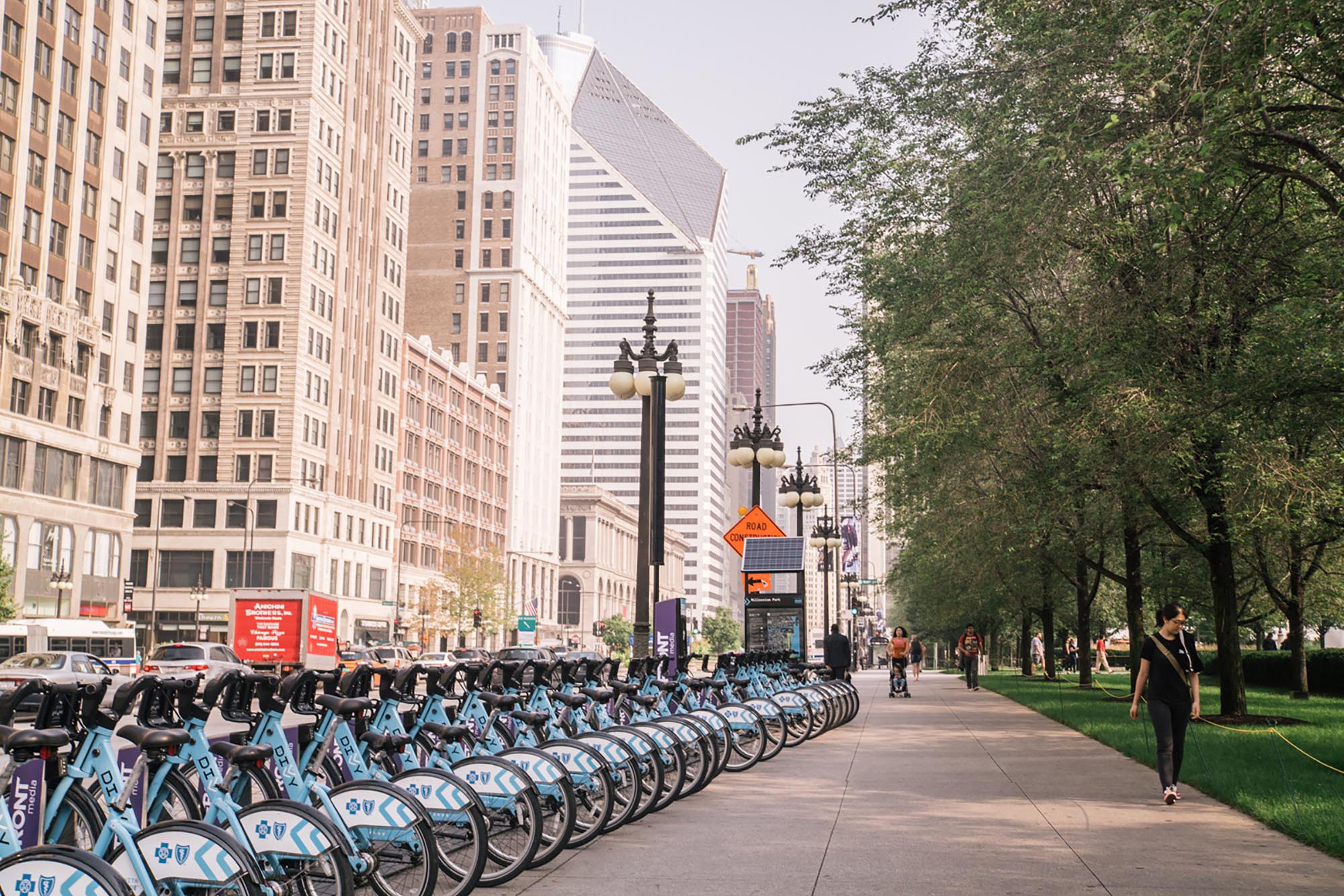 Chicago’s Loop, which is also known as Downtown, is the very heart of the city. The Loop is perfect for pedestrians – walking is far more convenient than battling your way through this central neighborhood’s near-constant traffic. From the Loop, you can hop on a public transportation line, whether it’s the ‘L’ or a bus, that will take you nearly anywhere in the city -- you can take the Blue Line all the way to O’Hare Airport, the Orange Line train to Midway Airport, or you can hop on a bus to the Museum Campus, Lake Michigan, or virtually any neighborhood in the city. Your options are endless.

The Loop is also Chicago’s business district, which means you have easy access to much of what the city has to offer. Downtown Chicago is full of restaurants, shopping venues, museums, and the city’s world-famous Millennium Park. 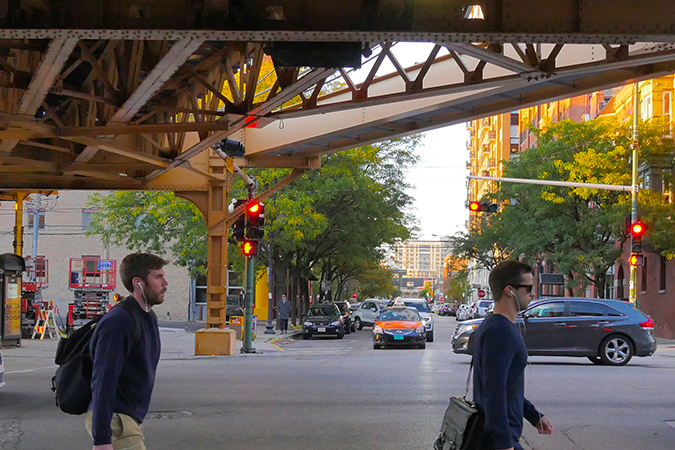 Fulton River District is a relatively new Chicago neighborhood born from a once-industrial area of the city. The neighborhood isn’t far from the Loop, West Loop, River North – making it easy for residents to explore other parts of the city on foot. Fulton River District also has access to a Green/Pink Line station, a Blue Line station, and Ogilvie Transportation Center. You can also hop on a Divvy, the city’s bike-sharing program.

While Fulton River District’s roots are industrial, the area has become a booming center for retail and restaurants. Residents in this neighborhood only need to step out their door to find an incredible meal or an area to explore. 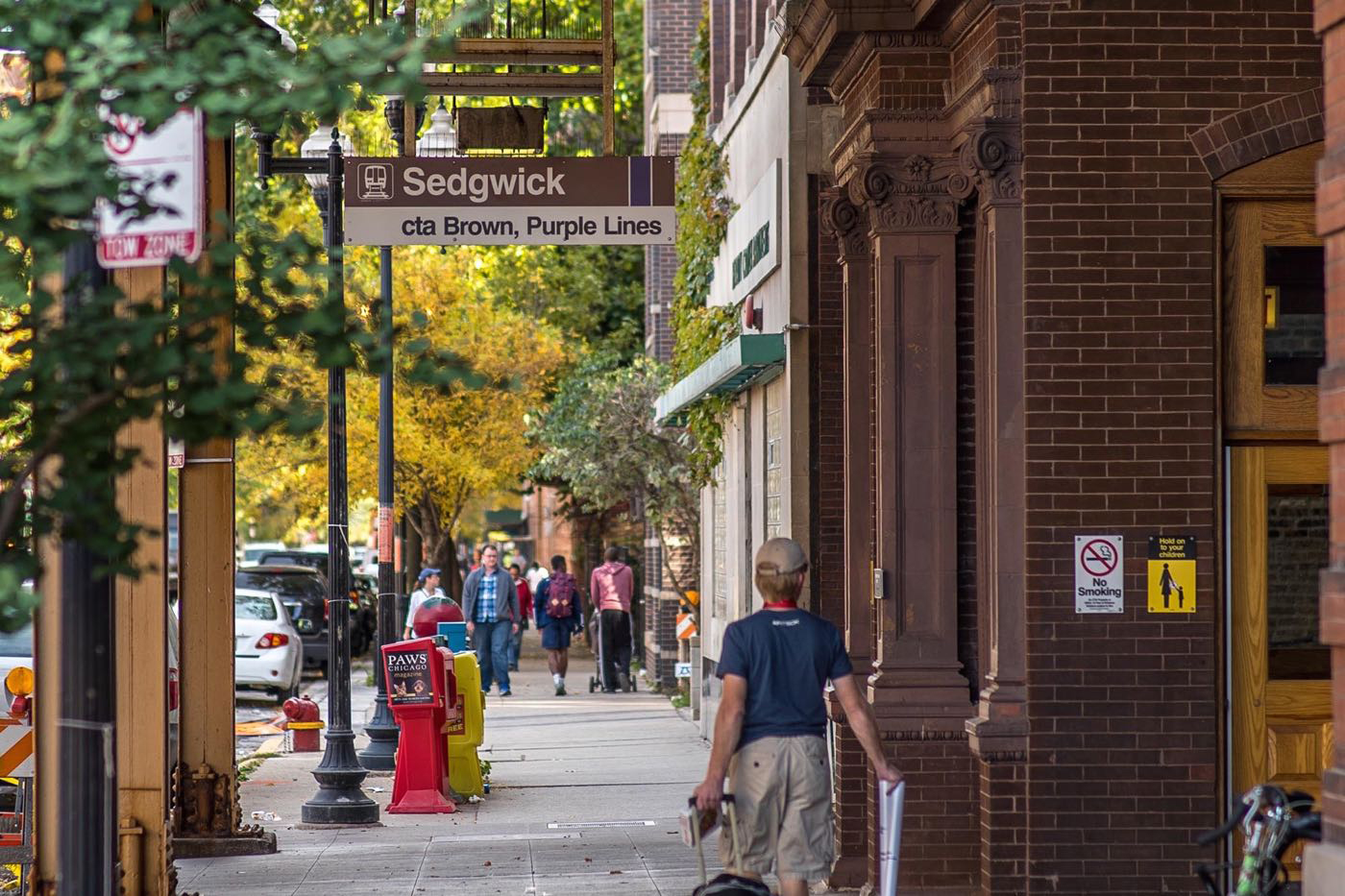 Old Town is a historic neighborhood with plenty of modern flavor. You can hop on the Brown Line at the Sedgwick station to explore beyond the borders of this neighborhood or use one of the two major buses: the #22 Clark and #36 Broadway. Getting to the Loop from this neighborhood only takes about ten minutes on public transit or a brisk walk.

When you want a day or night out, Old Town doesn’t disappoint. Stop at a bistro or café along the neighborhood’s Wells Street, browse antique stores, or catch a comedy show at the famous Second City. 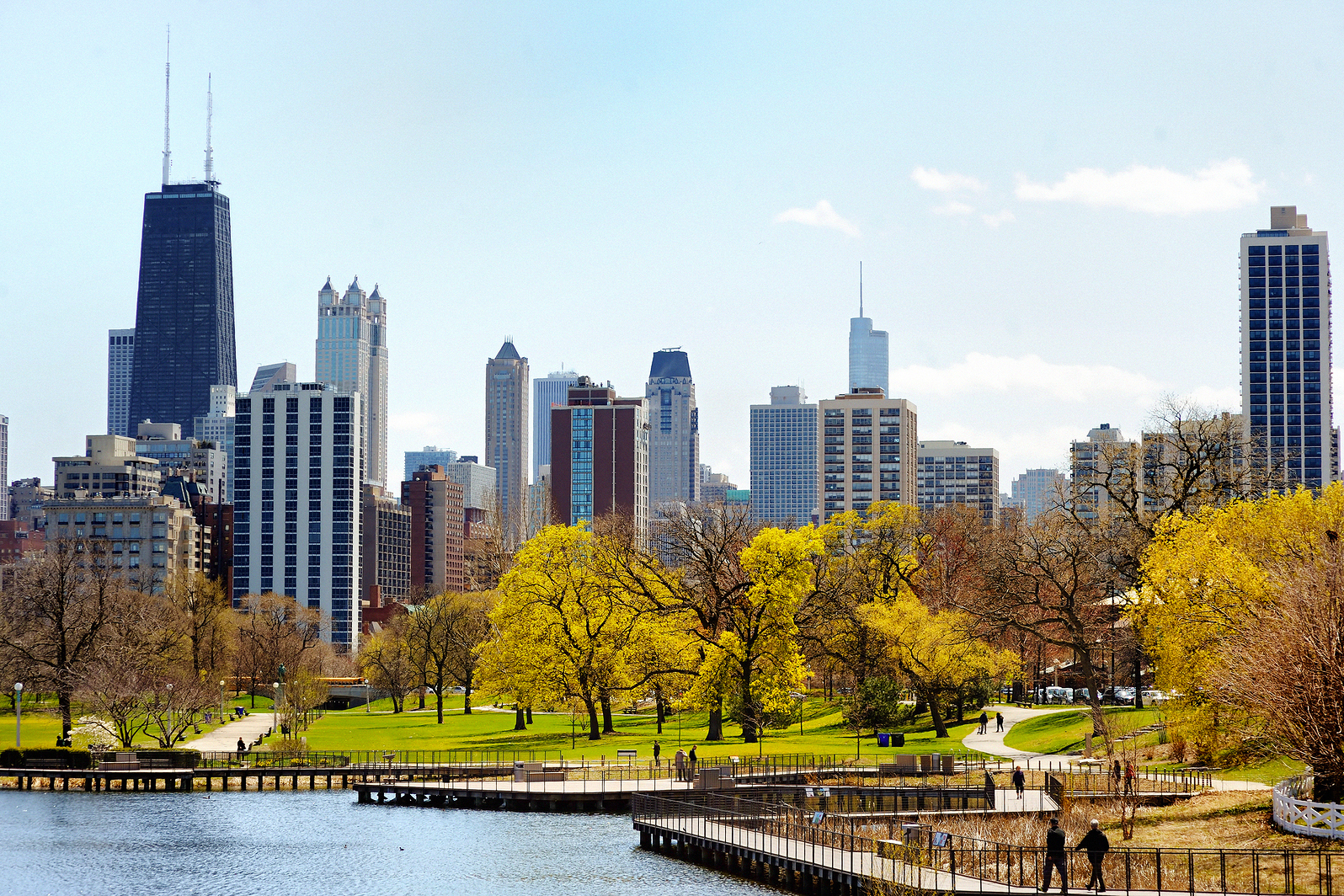 Three different ‘L’ lines – the Red, Brown, and Purple – run through Lincoln Park. This North Side neighborhood also has several bus routes that run to the Loop and elsewhere, meaning that no matter where you are in the neighborhood, you are never far from public transit. Chicago’s Lakefront Trail also runs through Lincoln Park. Bike or walk this trail to some of the city’s most popular beaches and destinations.

Lincoln Park is not only easily accessible via public transit, it’s also perfect for residents who love walking. Stroll through the paths of Lincoln Park Zoo, one of the very few free zoos in the country, or to North Avenue Beach. When you live in Lincoln Park, it’s easy to get around the rest of the city and you have plenty to enjoy in your own neighborhood.

Boystown is Chicago’s largest – and one of the country’s largest – LGBQT communities. The CTA’s Addison station and Belmont station serve the neighborhood. You can catch the Red Line from the Addison stop or the Brown, Purple, and Red Lines from the Belmont station. Divvy also has stations at both the Addison and Belmont CTA stops. You can also hop on the #36 Broadway bus. Boystown is just four miles from the Loop– the CTA will get you there in about half an hour.

There is never a dull moment walking through Boystown. Sample food from all over the world; Boystown has an eclectic and delicious collection of eateries. Each summer, you can watch or participate in the neighborhood’s Chicago Gay Pride Weekend and Parade or go to a Cubs game in neighboring Wrigleyville. 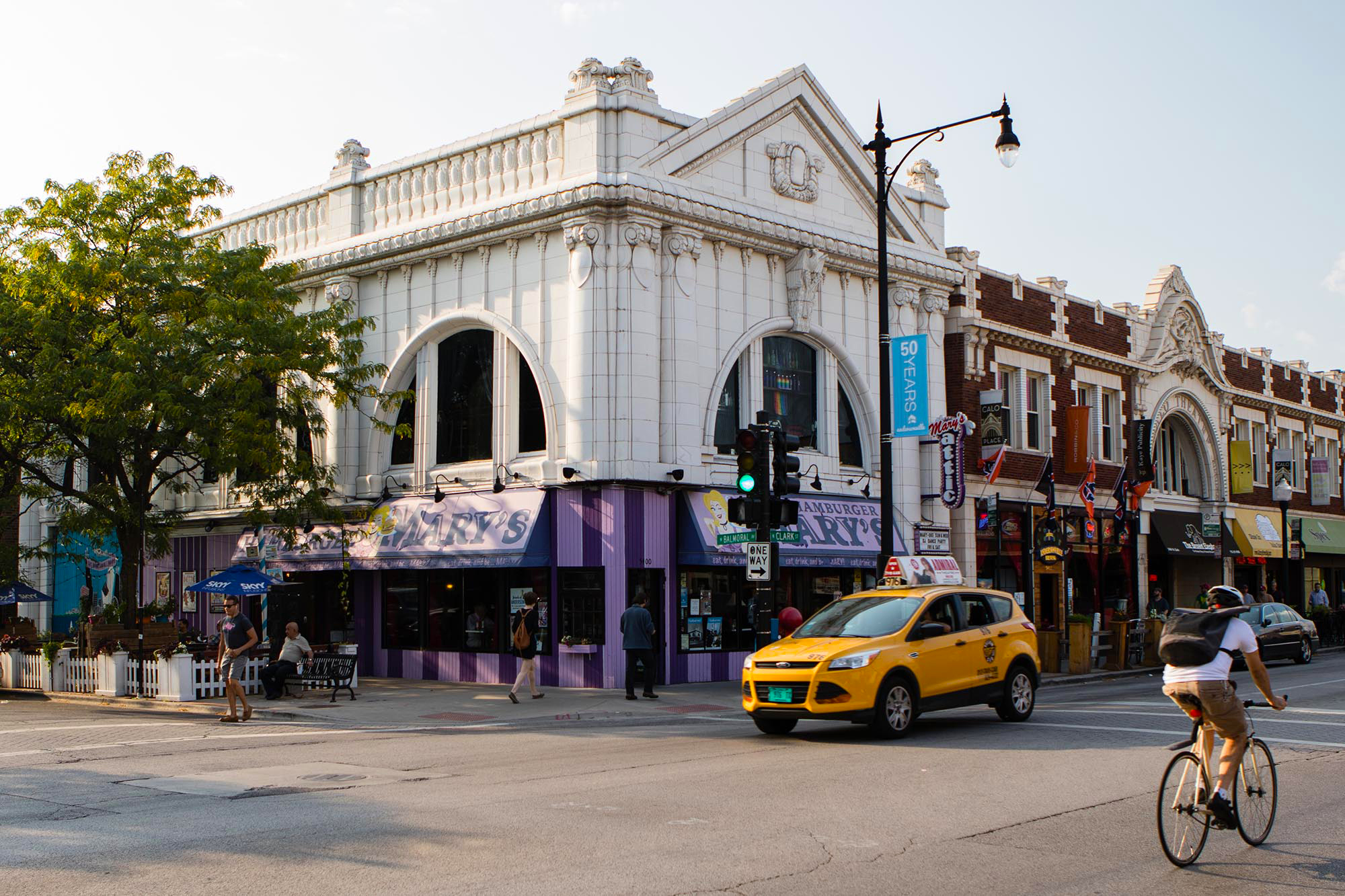 You can access the CTA from the Berwyn and Bryn Mawr Red Line stops in Andersonville. The #22 Clark and #92 Foster buses also run through the neighborhood. Getting around the city is a cinch with so many options. Andersonville, like Boystown, is a historic lesbian and gay community.

This Chicago neighborhood has no shortage of entertainment within its boundaries. A quick walk – no need for the car – will take you to a whole strip of restaurants and a ton of different shops. Andersonville is a unique spot in the city as nearly all of the businesses in the neighborhood are locally owned.

Palmer Square is a smaller neighborhood that resides within the larger Logan Square neighborhood. Denizens of Palmer Square have access to the CTA’s California and Western Blue Line stops, as well as the #52 California, #56 Milwaukee, #73 Armitage, and #74 Fullerton bus routes. Whether you want to get to O’Hare or the Loop, the public transit available in Palmer Square will make your journey an easy one.

Palmer Square takes its name from the large park that sits at the center of the neighborhood. Residents can enjoy the green space as well as easy access to local coffee shops, restaurants, and bars. 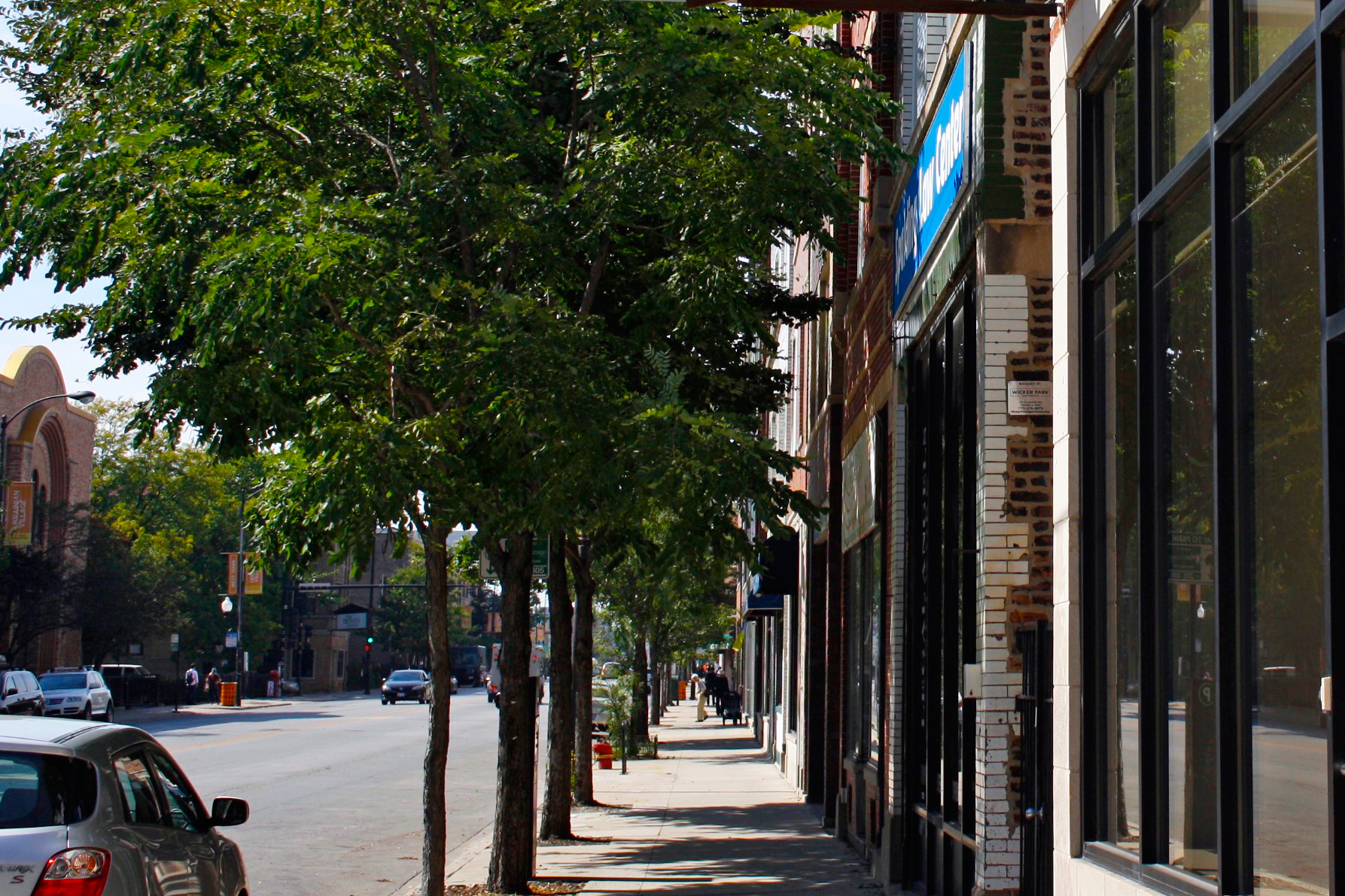 This Near West Side neighborhood is just four miles from the Loop. Ukrainian Village doesn’t have an ‘L’ stop, but what it lacks in trains it more than makes up for in bus lines. Neighborhood residents have easy access to the #49 Western, #50 Damen, #66 Chicago, and #70 Division buses. The Chicago and Division buses also stop at the Blue, Brown, and Red Lines.

When you live in Ukrainian Village, you’ll find yourself falling in love with neighborhood favorites that are just around the corner. Indulge in traditional Ukrainian food, or give in to your sweet tooth with Polish delicacies from one of the neighborhood’s many bakeries.