Chicago’s neighborhoods each have a unique character, yet there are common threads running throughout that make them look and feel like a distinctly Chicagoan community. The bungalow is one of those threads.

“[Bungalows] are the bulk of our housing stock. There are 80,000 of these scattered throughout the city,” says Tom Drebenstedt, a Chicago Architecture Center docent who created and lead a bungalow tour for many years. The center offers other tours from its New East Side location, as well as a gallery where visitors can explore architectural models devoted to Chicago's housing styles, including the bungalow.

Many of these bungalows are nearly a century old, and they remain a significant piece of Chicago’s architectural legacy.

What is a Chicago Bungalow? 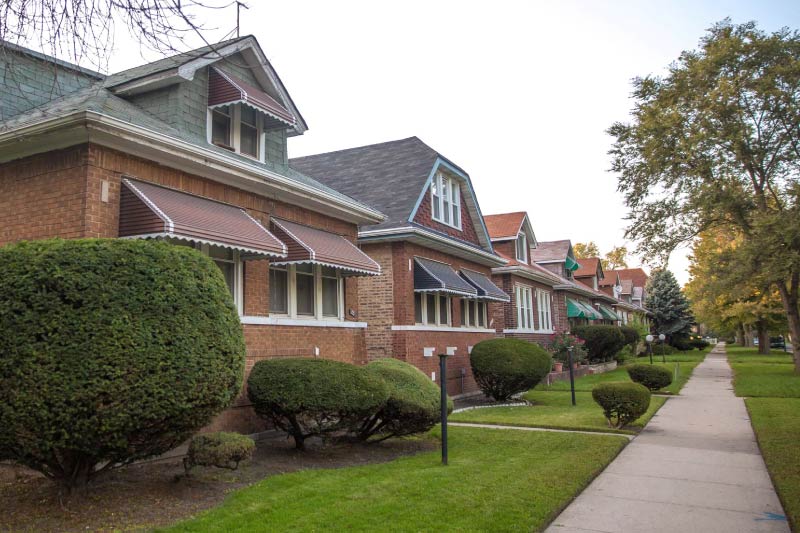 The Chicago bungalow is a one-and-a-half story single-family home. The first floor contains all of the main rooms of the home, while the upper story has an attic and dormers that allow for the buildout of additional space.

The interior of the bungalow is generously sized and designed to house families with multiple members.

“The bungalow represents the beginning of a modern movement toward bigger and accommodations with a little more volume and scale to them, but still took advantage of the standard Chicago lot,” says Ward Miller, executive director of Preservation Chicago.

The bungalow represents the beginning of a modern movement."

Bungalows are made of brick masonry, like many Chicago buildings, thanks to the high levels of clay in our soil, according to Drebenstedt. While “solid” and “dependable” are certainly accurate words to describe the bungalow, it also has touches of beauty. Some bungalows have art glass windows, clay tile roofs, and fanciful brickwork.

“[The bungalow] shows you how middle-class housing can be of a higher design value,” says Drebenstedt.

The Dream of Home Ownership 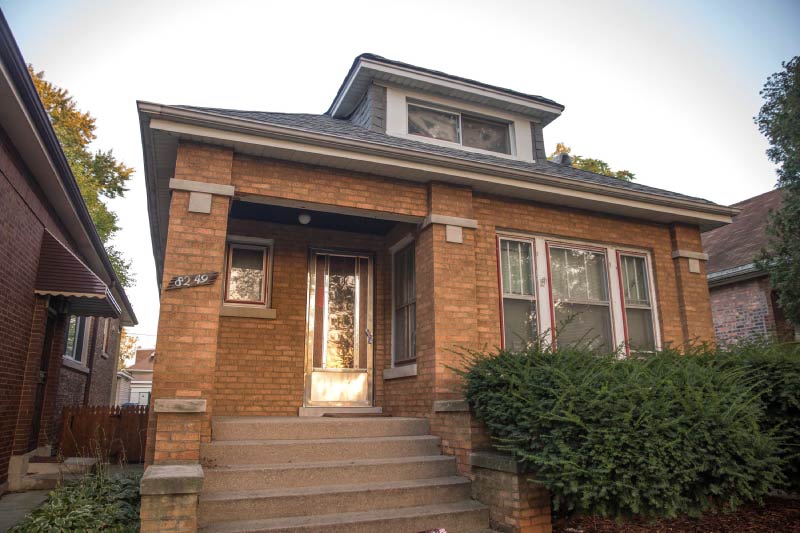 The Chicago bungalow first entered the scene around 1910. Its predecessor, the worker’s cottage, was slightly more utilitarian, according to Miller.

At that time, developers were responding to a desire for larger and somewhat more elegantly designed homes. “There was a huge movement to own your own home because we were getting more affluent as a society,” Drebenstedt says.

There was a huge movement to own your own home because we were getting more affluent as a society."

Chicago bungalows were largely influenced by the Prairie School, a style of architecture associated with Frank Lloyd Wright and a number of his contemporaries. The homes were affordable, yet they were reflective of an emerging American style, distinct from other styles that drew heavily upon European architecture for inspiration. From 1910 to about 1929, bungalows were built all over the city.

“It became so economical and so popular that entire blocks of the city, especially in areas of the South Side, Northwest Side, and Far West Side, found themselves to be almost block after block of these bungalows,” says Miller.

In the late 1920s, architectural style drifted away from the Prairie School, more toward European Revival, according to Drebenstedt. Then, the Great Depression and World War I happened and housing development dramatically slowed. Following the war, home styles changed again. Yet, the Chicago bungalows remain. 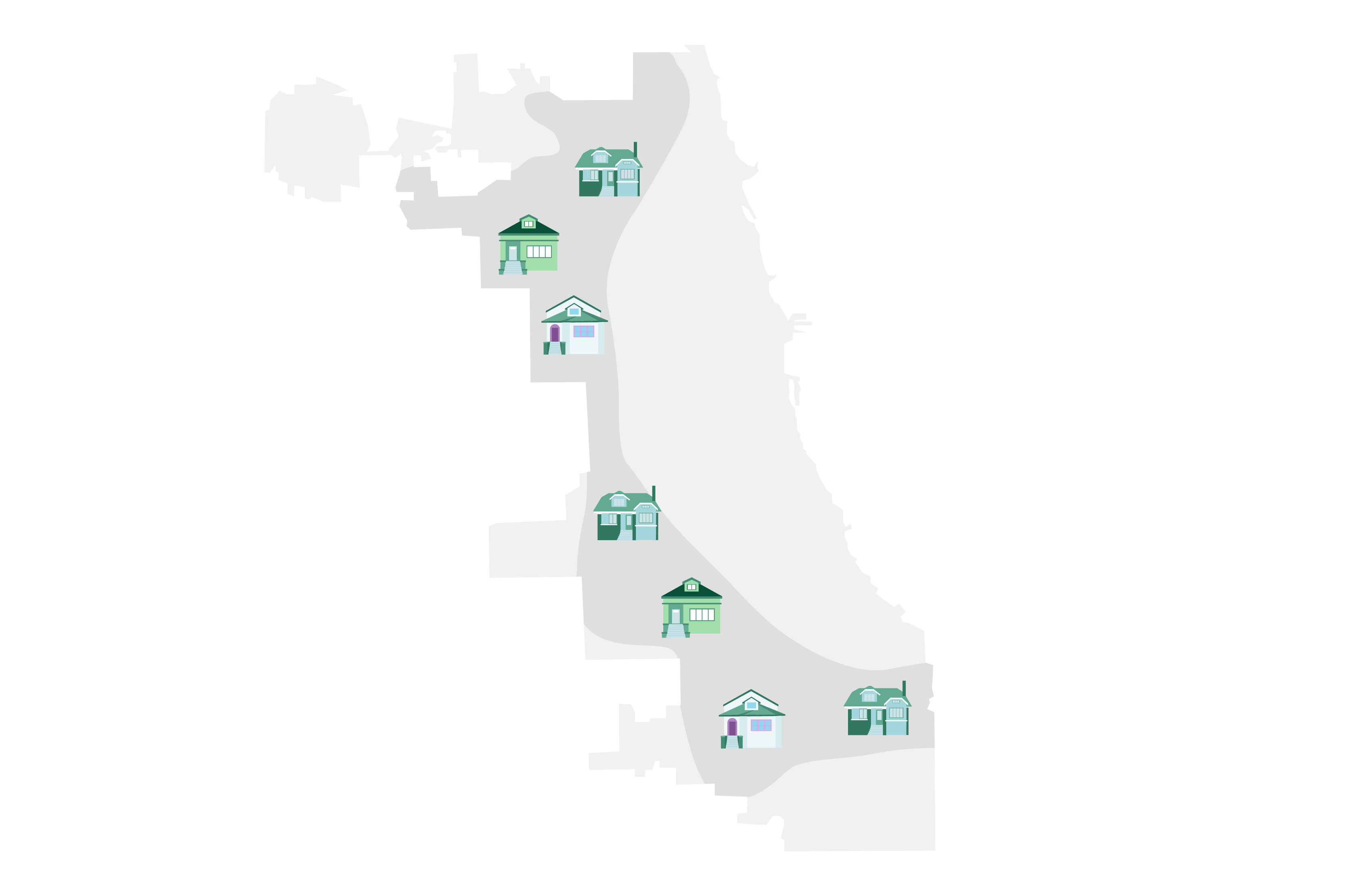 Today, the city’s high concentration of this style of home is known as the Bungalow Belt—a crescent-shaped swath of neighborhoods that covers northwest parts of the city, down west, and around to the south of Chicago.

The Belt is largely away from the lakefront. When bungalows were first built, these areas of Chicago were mostly undeveloped. “Developers would simply go out and buy an orchard and start building on it,” says Drebenstedt.

Parks are a common feature of neighborhoods in the Bungalow Belt. As developers were putting up these single-family homes on previously open land, they need something to attract residents. So, many of these neighborhoods were built around parks, according to Drebenstedt.

Some neighborhoods in the Belt stand out with slightly different styles. For example, The Villa has a number of homes influenced by the California-style bungalow, according to Drebenstedt. This style is characterized by wider homes and large, open porches—ideal for California weather, but less so for the interminable Chicago winters. You can see a number of this type of bungalow with now enclosed porches in the neighborhood.

Bungalows are a well-made style of home, but they are not immune to the waves of new development that will inevitably have a hand in rewriting a city’s neighborhoods. Many people recognize the value in preserving these homes.

While these districts are on the National Register of Historic Places, there are other potential tools for conservation, such as a Chicago Landmark designation. Landmark districts have more stringent rules on how buildings with their bounds can be altered, according to the Chicago Bungalow Association.

Changes could be made to buildings, but they would need to go through an approval process. Preservation isn’t about controlling what homeowners do to the inside of their homes, according to Miller. It’s about making changes that are sensitive to the original look and feel of the building and larger district. “The idea of a landmark district is not a static museum piece. These are living landmarks,” he says.

"The idea of a landmark district is not a static museum piece. These are living landmarks."

The kinds of changes preservation could prevent include large additions to the second story of bungalows—often referred to pop-ups—and complete demolition. “There are a lot of talented architects focused on accommodating this and keeping the exteriors intact while redesigning the interiors to accommodate our lifestyles,” says Drebenstedt.

“When you think of these great neighborhoods of Chicago, oftentimes they are anchored by a Chicago Landmark District,” says Miller. “These are neighborhood destinations. Part of it is because neighborhoods come together to protect something special.”

“We should consider the bungalow as a manifestation of the all-American, middle-class dream house,” he says. It’s that very sentiment that inspired a contest to design an updated version of this style of affordable home. Architect Greg Tamborino won the contest which was organized by Disruptive Design.

The Chicago bungalow may be getting a 21st-century update, but the originals that make up the Bungalow Belt remain an undeniable part of the city’s neighborhoods and its architectural legacy.