Whatever you do, don’t ask for ketchup.

Chicagoans have a lot of city pride. We stand by our sports teams and our iconic landmarks, but perhaps the biggest source of pride is our food. Ask a denizen of Chicago about deep-dish pizza versus New York-style pizza and you’ll probably get a passionate response. But we aren’t here to delve into that debate. (Deep dish clearly wins, anyways). We are here to trace the history of the beloved Chicago-style hot dog.

Chicago hot dogs – sometimes described as being “dragged through the garden” – have a very specific makeup and set of toppings. First, you start with a poppy seed bun and an all-beef hot dog. Then, you pile on the toppings. Yellow mustard and relish are the two condiments. The “garden” includes chopped onions, a dill pickle, tomatoes, and pickled sport peppers. The final touch is a sprinkling of celery salt.

The hot dog’s first appearance in the city comes from the Chicago’s German immigrants. In the 1800s, Germans came to Chicago in large numbers and with them came the frankfurter. The hot dog really took off when Vienna Beef served up this classic fast food at the Chicago World’s Fair in 1893. (Vienna Beef, still the go-to manufacturer of the Chicago hot dog, is currently based in the city’s Bucktown neighborhood)

By the time the Great Depression hit in 1929, the hot dog was poised for popularity. The meat-on-a-bun meal was quick and, most importantly, cheap. Chicagoans could get a hot dog for a nickel during the Great Depression, a time when every single cent counted.

The hot dog’s popularity didn’t stop when the economy turned around. Instead, it was already a staple street food.

Chicago is hardly the only city with a love for hot dogs. It is the ingredients that set our version apart. Fluky’s Hot Dogs, a Chicago institution dating all the way back to 1929, has claimed to be the inventor of the now sanctified Chicago hot dog. The first Fluky’s hot dog stand stood at Maxwell Street and Halsted Street in Little Italy. Their hot dog became so popular among Chicago residents that it was nicknamed the “Depression Sandwich.” Fluky’s still operates two stands in the Chicagoland area: one in Niles and the other in Buffalo Grove.

Fluky’s claim may or may not be true, but the ingredients that eventually came together to form the quintessential Chicago hot dog were a convergence of different cultural factors, according to WBEZ Chicago. Germans already had a tradition of eating franks with bread and mustard, a tradition that easily carried over to Chicago. The all-beef hot dog is likely thanks to the presence of Chicago’s Union Stockyards, which produced a huge portion of the entire country’s supply of beef.

Relish was another European creation that got tossed on top of the Chicago dog along the way. Onions and tomatoes joined the riot of flavors possibly because of the active fruit and vegetable market on Maxwell Street. Pickles and peppers, already popular during the hot dog’s ascension to flavor fame, joined the fray. Celery was once an incredibly popular veggie, so why not add a dash of celery salt? 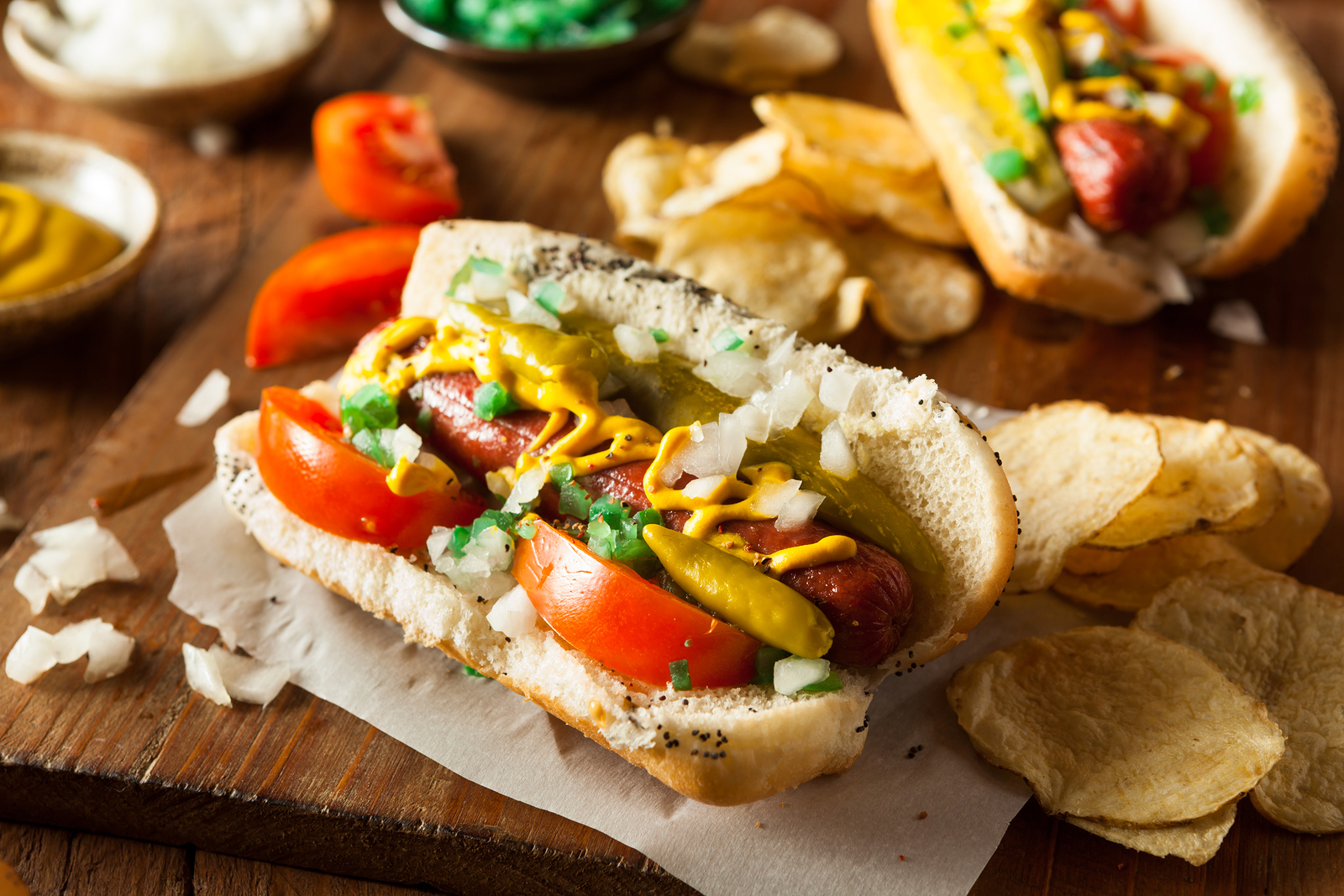 Anyone who knows about Chicago dogs knows you don’t ask for ketchup. Some people have chalked this up to food snobbery, while others argue that ketchup is a faux pas because it would ruin the delicate flavors of an already very busy hot dog. Ketchup is a pretty sugary condiment, which arguably does distract from the other flavors. It might not be the end of the world to add ketchup, but you might be hard pressed to find a Chicago hot dog stand that offers it without some colorful commentary.

Here’s to many more years of Chicago’s most iconic fast food.