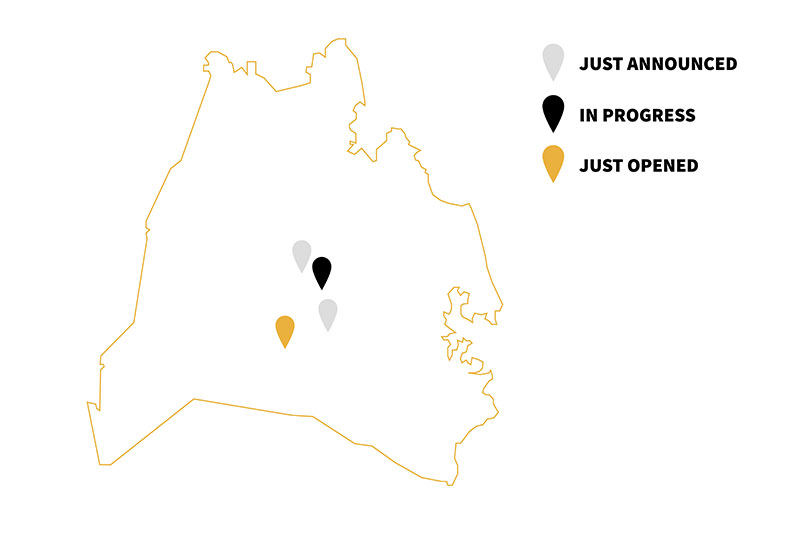 Business has been booming in Music City for a while now, but in the last year, developers and entrepreneurs have raised the stakes with bigger ideas and bigger budgets than Nashville has seen in a while. Notable developments of late include the final approval for Nashville’s very first MLS stadium, some major renewal downtown on Broadway, and the 2019 projected opening of the first ever Museum of African American Music. Suburban areas are also gaining some attention with mixed-use developments taking root and breaking ground. From Green Hills to Germantown, developers are rising to meet Nashville’s housing and dining needs as the city’s population continues to swell.

The hard-fought battle over whether or not the Nashville Soccer Club will have a new home is finally over, and to the victor go the spoils—specifically, 10 acres of land in South Nashville that were previously home to the city’s fairgrounds. An area that has stagnated over the years is poised for a true renaissance as the $275 million project was granted final approval by the Metro Council in September.

The 30,500-seat stadium, set for completion in 2021, will be the central feature of a sprawling development including residential and retail space, restaurants, a even a hotel. The debate surrounding the project has been emblematic of Nashville’s dual nature of progress and tradition. Unlike the bitterly fought battle over transit earlier this year, the MLS Stadium decision went the way of a more progressive vision of the city. The project hinged on an agreement between the MLS team’s ownership and union-affiliated Stand Up Nashville, which ensures that 20 percent of the new development will be dedicated to affordable housing and stadium workers will be guaranteed a $15.50-per-hour minimum wage.

"If I were to vote with my heart, I would be a no. But my neighbors have other ideas,” Councilman Mike Freeman told The Tennessean, “They see this as a chance for South Nashville, especially the 16th District's chance at major development."

Across town in North Nashville, the Buena Vista arts district is poised for transformation as a 68-unit mixed-use residential and retail space, Ludlow Flats, is set for 1005 Scovel St. Early reports indicate that the project will include restaurant space on the ground level. The developing neighborhood has never seen anything like this $19 million building, as it’s estimated to be the largest of its kind in the area.

A district known for its burgeoning culinary and arts scene, Buena Vista’s housing options have tended toward more historic homes. The project is a companion to Ludlow Row the recent row house development that’s in-progress across the street. It’ll be interesting to watch both projects unfold, as many community leaders have called for more developments offering affordable housing across the city in neighboring areas like Germantown. The Nashville Post reports that Cottingham Capital Partners, a Nashville-based firm, purchased four lots in the area for $1.7 million and plans to begin construction in November.

The former site of the Nashville Convention Center will soon be home to the mixed-use development Fifth + Broadway in the SoBro neighborhood of downtown. Located on over 6 acres of land in the heart of Music City, this $400 million project will be home to residential, office, and retail space in addition to the upcoming National Museum of African American Music. The museum will seek “to educate the world, preserve the legacy and celebrate the central role African Americans play in creating the American soundtrack.”

At 34 stories tall and a total of 235,000 square feet, Fifth + Broadway promises to transform lower Broadway. The popular thoroughfare is not widely known as a residential area, but that’s likely to change with the addition of 380 new residential units.

The face of Green Hills hasn’t changed this drastically since the Hill Center development opened in 2007 bringing West Elm, Whole Foods, and fashion designer Billy Reid to Music City. The newly completed Vertis Green Hills is a $125 million luxury apartment tower on Hillsboro Road in the center of the neighborhood. The space offers residents a high-end fitness center, yoga studio, and “resort-style” pool. From studio apartments to penthouse suites, Vertis offers a wide range of options for residents seeking a downtown feel in one of Nashville’s oldest suburban communities. The development includes 85,000 square feet of dining and retail space taking up the first three floors of the building.

As Tim Downey, CEO of Vertis developer Southern Land Company, tells the Nashville Business Journal, “There's never been activity on the streets in Green Hills. There's never been a lot of people walking. All of a sudden, you'll have people eating outdoors and walking to shops.” Downey is probably right. There hasn’t ever been much foot or bicycle traffic in Green Hills, and, in spite of vast sidewalk coverage, this is likely due to the distance between various destinations in the neighborhood’s main retail and dining corridor as well as a lack of residential space on Hillsboro Road. If the first few days of the Vertis opening are any indication, this is likely to change sooner rather than later.