Since 2004, the San Diego Symphony Orchestra has used Embarcadero Marina Park South for outdoor shows, including its concert series Bayside Summer Nights. By assembling concessions, bathrooms and the like, essentially creating a festival venue, they have been able to serve crowds that average over 2,500 in size.

Per the San Diego Union-Tribune, SDSO has submitted a proposal to the Unified Port of San Diego for the permanent development of an outdoor venue called the San Diego Symphony Bayside Performance Park. On Wednesday, the Port approved the project.

Symphony CEO Martha Gilmer told 10News that “over the last three years, we’ve been looking to expand the level of artists we bring to perform with our orchestra. This also will allow us to break into other genres and just have a premier experience on the bayside.”

The park, which was built in the late 1970s, currently has an eight-foot-wide walking path and a flat, grassy lawn. The Performance Park would allow for multiple headliners in a 10,000-seat arena. More than that, it would allow for artists who attract huge crowds and wouldn’t consider the park in its current incarnation.

“This is an opportunity for San Diego to see some artists that they wouldn’t otherwise see,” Gilmer said.

The largest acts to the venue to date have been Diana Ross and Tony Bennett, and that was solely due to shifting the seating capacity to up to 4,500. A 10,000-seat venue would change the game, allowing for large acts to perform in San Diego at the bay.

The number of yearly shows would also increase from 37 to 110, including non-symphony events. Along with venue seating, there would also be a 2.3-acre lawn for seating, made of a sand-based synthetic turf. Temporary seating on the lawns and a bay viewing deck at the back of the stage will be available for use during non-event hours. Also open to the public at all times will be a public promenade surrounding the venue.

The project would take with it, however, 61 trees from Embarcadero Marina Park South. To replace the one-third acre that will be lost to public park access, a yet-to-be-decided fee will be paid by the symphony for replacement.

Gilmer said, “All of those things that are part of the park today will remain part of the park.” In the surrounding park area, the project is meant to enhance the other amenities. “One thing about this structure is its very environmentally light. We really wanted to keep this as light and organic to the site as possible,” Gilmer added.

How will this kind of venue affect residents across San Diego Bay? Certainly, there must be concerns about noise pollution in Coronado. To help, a 13,000 square-foot performance facility with a sound amplification that will focus music towards the audience would also minimize the bleed across the bay. Two monitors meant to measure the sound impact on residents will be installed across the bay as well. 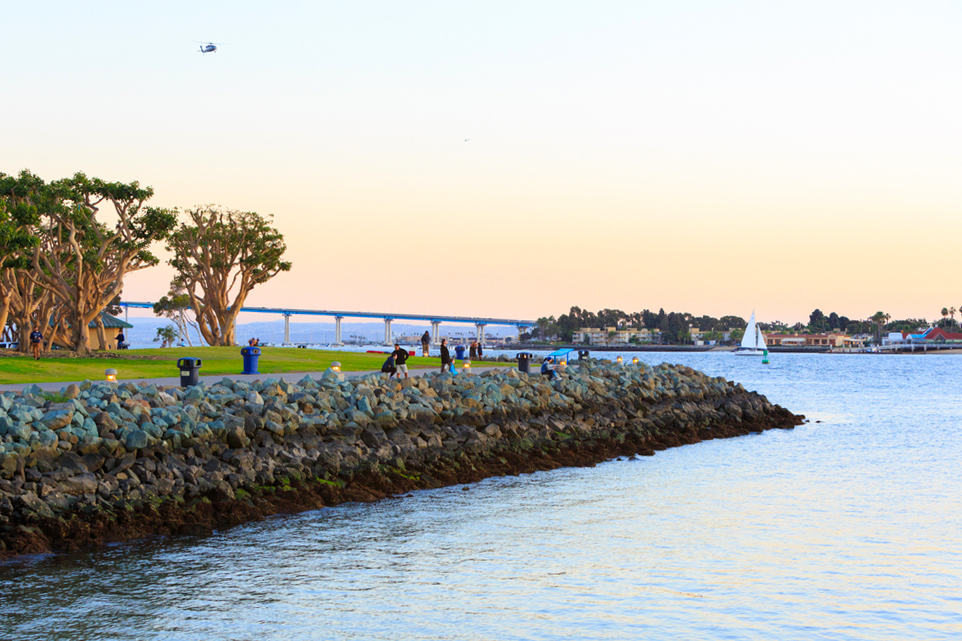 “That was one of the considerations that got top priority from us,” Gilmer told 10 News. “That’s a really important thing for people to know. We want to be good neighbors.” The incoming chairman of the port board, Rafael Castellanos, echoed that sentiment by saying, “we always have to balance any sort of environmental impact with new amenities that will bring people down so they can enjoy the waterfront.”

The new venue for the permanent stage will cost $45 million. Increased revenue from future (and larger) shows will finance additional project costs. Though the nonprofit spends nearly all its revenue, it still manages to stay in the black. In 2016, it spent $25 million of its $27 million revenue. Gilmer said that if they can’t raise all $45 million in donations, they will get a $22.5 million loan.

“I think it will be a beacon for the city of San Diego,” Gilmer said.

Now that it has Port approval, the project will need approval from the California Coastal Commission. That could happen as soon as the summer, though the commission has already wondered aloud how the port will replace park land.