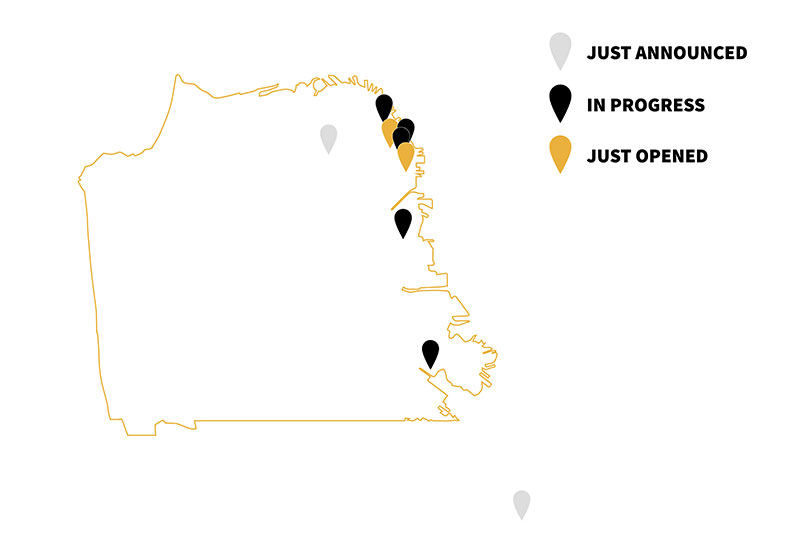 San Francisco is one of the most sought-after cities in the world, and the real estate prices reflect that. The city is also known as a tech hotspot and one of the main hubs in Silicon Valley. San Francisco’s skyline is ever-changing, with more and more developments being built to accommodate the need for office space, residences, retail, and more. With major companies like Facebook, Dropbox, and LinkedIn moving into office space in San Francisco, it’s clear that the city’s reputation as an incubator for technological advancements is only going to grow, and neighborhoods are evolving around these areas to make room for more commercial and mixed-use developments.

One example of the city’s growth is San Francisco’s newest neighborhood, The East Cut, which was largely born out of a necessity to improve quality of life in commercial districts and transform them into a place where people can both work and play, according to The Bold Italic.

These are the developments that are making the biggest impact in San Francisco and around the Bay Area.

After sitting largely vacant for years, the Vallco mall in Cupertino is finally getting a makeover. The project, dubbed Vallco Town Center, will be transformed into 1.81 million square feet of office space, 400,000 square feet of retail space, and 2,402 housing units, Curbed SF reports. The development sits just a few blocks away from Apple Park, making it very likely that the homes in Vallco Town Center will be highly sought after by Apple employees and others who work in Cupertino. Developer Sand Hill Property Company invoked the new California Senate Bill 35, which limits the power of cities to obstruct the development of homes, in order to streamline the approval process, Curbed SF reports. According to the plan for the development, 50 percent of the homes will be designated as affordable housing.

Another new development making way for more housing will be in the Lower Nob Hill neighborhood.For 17 years, Hemlock Tavern in Lower Nob Hillwas a local watering hole where San Franciscans came to knock back a few. But the popular music venue will close its doors and be demolished to make way for a 54-unit, mixed-use condominium building. Located on Polk Street, the condo building will join a busy business district filled with restaurants, cafes, and bars. With the high demand and low supply of available housing in San Francisco, Hemlock Tavern is the latest of many beloved local businesses to shut down in order to make room for the development of homes.

When The Exchange on 16th opens its doors, it will be 100 percent occupied by Dropbox, the file hosting service. Dropbox has a lease on the entire Mission Bay development, which is made up of four interconnected buildings—736,000 square feet of space in total (an additional 14,000 square feet of space will be dedicated to retail). In fact, Dropbox will have a presence in the building for quite some time, as the tech company signed a 15-year lease with Kilroy Realty and set the record for the largest office space lease in the city’s history, according to BisNow. The company will move into the offices over the course of three phases, beginning in the fourth quarter of 2018 and wrapping up in the fourth quarter of 2019. Designed by Rios Clementi Hale Studios, The Exchange on 16th features courtyards, rooftop gardens, and open floor plans with lots of natural light. Located at 16th and Owens Street, the new development is adjacent to San Francisco’s Potrero Hill and Dogpatch neighborhoods. It’s also a short walk from the new Golden State Warriors stadium.

In addition to Dropbox moving into a new development in the city, Facebook is also looking to make its move to Park Tower. When Park Tower is unveiled, 70 percent of the floors will offer stunning views of the Bay. In fact, “the tower will be closer to the bay than any other ground-up office development in San Francisco.” The building will also feature 14 sky decks and 50,000 square feet of outdoor space. According to the San Francisco Chronicle, Facebook became one of the largest tech tenants in San Francisco after signing a lease on 755,900 square feet of office space in the tower. And this isn’t the only sign of Facebook’s increasing presence in the city. In May, Facebook-owned Instagram moved into 181 Fremont Street, a stone’s throw away from where Park Tower sits.

In August 2018, the $2.2-billion Transbay Transit Center officially started full transportation services, to much fanfare. The unveiling of the intermodal transit station had been a long time coming, having begun construction on the first phase of the development in 2010. If and when the California High-Speed Rail is launched, the Transbay Transit Center will be the northern terminal of the train’s journey across the state. In addition to being an important transit station, the center is also architecturally unique, featuring an amphitheater and rooftop park, as well as plenty of natural light and art installations designed by local artists.

The transit center is currently undergoing repairs, having abruptly been closed on September 25, 2018 after cracks were discovered in the steel beams that support the building’s rooftop park. According to the San Francisco Chronicle, officials cannot yet say for certain when the transit center will reopen. While the shutdown of the transit center has caused headaches for drivers and commuters, officials say interest from retailers hasn’t stopped or slowed down, with prospective tenants still inquiring about the available retail spaces.

Oceanwide Center is another skyscraper project that’s in the works in the SoMa neighborhood. This 2.4-million-square-foot development is an ambitious project that merges the interests of China, the U.K., and the U.S. With two towers—one topping out at 61 stories and one at 54—the skyscraper complex will include office space, residential units, and public open space, according to Architect Magazine. When construction wraps up, Oceanwide Center will be the second tallest building in San Francisco, behind only the Salesforce Tower. Having broken ground at the end of 2016, according to Curbed SF, it’s estimated that construction will not be complete until around 2021.

Over in the Bayview and Hunters Point area, Candlestick Point and Hunters Point Shipyard is a new residential and commercial redevelopment that will include affordable housing, retail, commercial space, and more. It’s been praised as a mixed-use community of the future, with millions of square feet of office space and housing units. However, the project has been stalled by controversy, with reports of falsified soil testing preventing construction from continuing.

Hunters Point Shipyard was formerly a nuclear testing site, and cleanup efforts to rid the site of nuclear waste were ongoing, until employees hired to clean up the soil admitted to falsifying data. Most recently, in September, a highly radioactive radium deck marker was discovered in Parcel A, the site of recently built condos, BisNow reports. While government agencies claim the parcel is not dangerous, many residents and citizens are still expressing concerns. Although the first round of residents began moving into their homes in 2015, it remains to be seen if or when construction on the development will be completed.

When The Avery SF building is fully completed, the real estate market of San Francisco’s Transbay District neighborhood will gain more than 500 new homes. With 56 stories, the residences in The Avery SF will begin on the 33rd floor and total up to 548 units: 118 luxury condos, 280 luxury apartments, and 150 affordable apartments. Many of the homes will offer sweeping views of the Bay Bridge, San Francisco Bay, and Downtown San Francisco. The tower will also include cafes, restaurants, and grocery stores on the ground level, as well as rooftop parks and event spaces. Occupying the 400-488 stretch of Folsom, The Avery SF will sit on one of the last remaining skyscraper parcels in the city. The 618-foot glass tower is the brainchild of Rem Koolhaas, the notable architect who also designed the famous and architecturally significant CCTV Headquarters in Beijing, China. Construction of the tower is expected to reach completion before 2020.

The $1.1-billion, 1,070-foot Salesforce Tower is visible even on the foggiest days in San Francisco, thanks to its sheer size. The massive development in the SoMa neighborhood is the second-tallest building west of the Mississippi River and sits just a stone’s throw away from the newly opened Transbay Transit Center. The 61st floor of the tower, also known as the Ohana Floor, recently opened up as a free sky deck, Curbed SF reports, offering sweeping views of Downtown San Francisco and the San Francisco Bay. Salesforce, the namesake of the building, shares the tower with multiple other tenants, including Bain & Company, WeWork, and more. The Salesforce Tower has made Downtown San Francisco even more of a tech hotspot; the businesses occupying the building have good company nearby, with Linkedin and Facebook also setting up shop in the area.

According to Business Insider, the tapering silhouette of the Salesforce Tower lends itself to rounded corners, which make for office nooks where teams can hold small meetings or informal gatherings. The office design also makes use of natural light as much as possible.