March Madness is upon us once again. The NCAA Tournament tips off on March 13 with the first of many games to determine the men’s college basketball national champion. Coined in 1939, the term “March Madness” has come to perfectly describe this tournament that grips millions of basketball fans as they fill out brackets and gather to cheer their favorite schools down the road to the Final Four.

Not sure where to settle in for the day to see all the action? Phoenix is full of great bars to watch the games. What earns a bar the reputation for the perfect March Madness joint? The level of energy, the type of food offered, and the number of screens available to keep everyone happy. Neighborhoods.com has put together a list of the best bars in and around the city where you can make the most of the madness.

It’s not just a name. Dan Majerle, former Phoenix Suns star and current Grand Canyon University head coach, is the owner of Majerle’s Sports Grill. Locations can be found in Chandler, Goodyear, and Scottsdale, but the Downtown Phoenix location is where it started. Nosh on appetizers like Gorilla Wings or Slam Dunk Shrimp, then step it up with entree favorites like the Fried Jalapeño Burger or Proski’s Rajun Cajun.

Food and drink specials will be offered during the basketball games, which can be viewed on 50 televisions throughout their three viewing rooms. Majerle’s also offers opportunities for private parties and VIP areas. 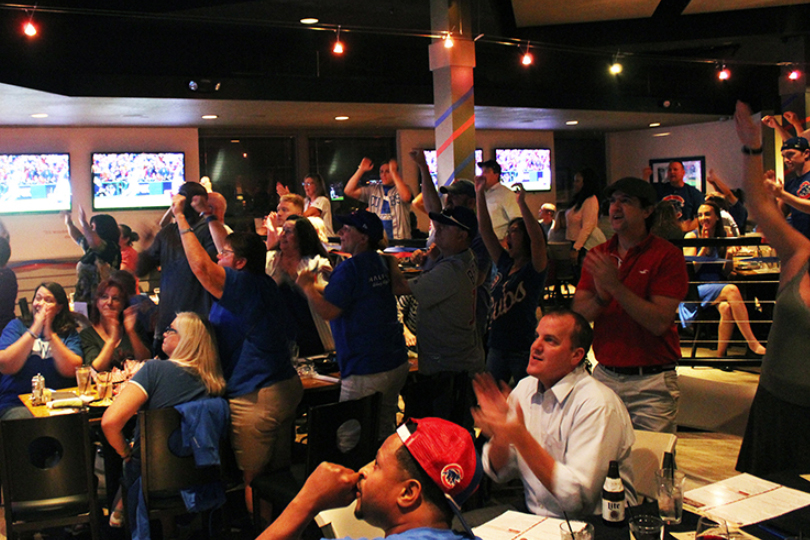 Offering an eclectic menu focusing on Chicago fare, Half Moon Windy City in The Biltmore neighborhood offers classics like Italian Beef on a roll, a Vienna Chicago Dog, and a Chili Cheese Dog. They also spare no expense by flying in Eli’s Cheesecakes straight from The Windy City so you know they’re not messing around.

You’ll find multiple high-definition TVs here, as well as the option for private game-viewing parties. There are also pool tables, dart boards, and a shuffleboard to keep you busy during halftime.

On the border of Camelback East Village, Armadillo Grill provides 44 high-definition TVs, eight of which are over 60 inches, perfect for maximum viewing capability. Expect a raucous crowd, especially with a pool table and arcade corner nearby. The beer selection is sizable, and there’s plenty of wine and spirits as well.

The fried pickles come highly recommended. They have a lot of pub staples, but there’s pasta and a gluten-free menu as well. They also serve food until midnight during the week and until 1 a.m. on weekends, which will come in handy with the game schedule.

This lively bar in Scottsdale offers more than 50 high-definition TVs to cover all of the March Madness action. But should you prefer intimate viewing, they offer personal screens in each booth with wireless table audio systems.

There’s a pool table, ping pong table, shuffleboard, video golf, NTN trivia, and dartboards for in-between the action. However, Max Sports Grille is appreciated most for their beer selection (over 30 on draft) and food selection like “build your own mac n’ cheese” and green chili pork.

For March Madness, they’ll be running a special on March 15 and 16 for brunch. The $4 green tea shots and $4 mimosas will be a good way to work out that hangover from yesterday before settling in for today’s games. You’ll have plenty of chances to watch them across 60 televisions, not to mention individual soundboxes at all tables.

Don’t want to leave your dog home alone all day? Sit out on the pet-friendly patio with them.

Don’t let the simple name fool you. Cold Beers and Cheeseburgers offers a solid selection of gourmet burgers. Standouts include the Ring of Fire with jalapenos, spicy mayo, and buffalo sauce, or the adventurous Bacon PB&J with bacon, peanut butter and jelly, and chipotle sauce. Plus, their beer menu offers over 150 selections.

Look for one of their seven locations, including Phoenix, Chandler, Gilbert, and Old Town. Whichever one you choose, you’ll find comfy leather booths, community tables with built-in beer coolers, indoor/outdoor bars that connect to the patio, and over 30 HD flat screen TVs. Everything you need for a day full of college basketball.