How Phoenix Defined Urbanism in 2017

Curbed recently reported on the efforts of multiple cities towards improving their infrastructure, minimizing the effects of climate change, and creating housing standards that reflect the environmental concerns of modern buyers.

When it comes to environmental concerns, cities have become independent entities, sometimes going against the grain by looking at urban design as a method of resiliency. This, coupled with progressive and political stances on issues such as affordable housing and public policy, has certain cities moving forward faster than others.

One city that has boldly carved out a place in the world of urban pioneering is Phoenix. The city has become one of the most aggressive and innovative leaders in the state towards economic inclusion and remains steadfast in efforts toward environmental justice.

With goals of becoming carbon-neutral by 2050, Phoenix has taken numerous measures to enhance sustainability with over $9 billion in infrastructure investments along the Valley Metro Light Rail System. It’s also the first North American city to join the Ellen MacArthur Circular Economy 100 organization, which aims to prevent economic waste, per the city’s website.

Phoenix’s commitment to economic stability can be seen in projects like the revitalization of areas like Roosevelt Row, which includes the creation of creative space and affordable housing for artists in the Evans Churchill neighborhood. The city also contributed 30 vacant lots in the Warehouse District to neighborhoods such as Central City and Central Park Place for the construction of affordable housing, which will be developed by Habitat for Humanity. 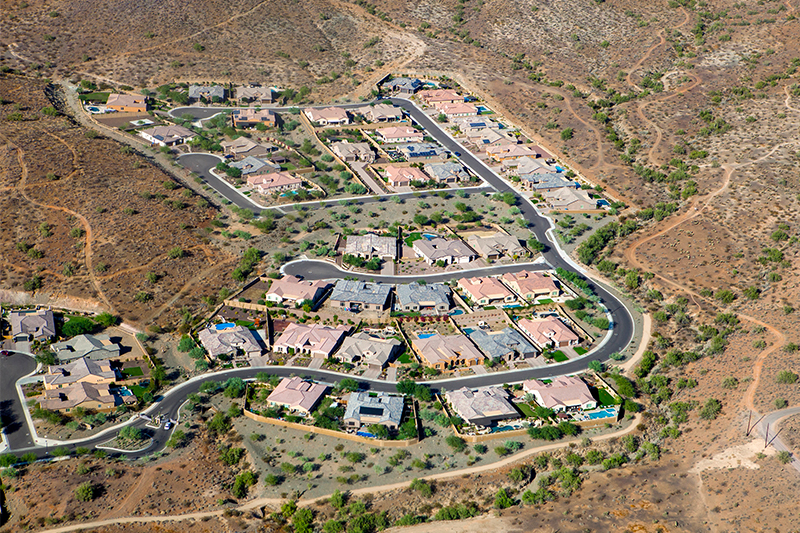 With revitalization plans underway well into 2018, homebuilders are stepping up their standards as well. Maracay Homes designed or developed nearly 300 Phoenix-area homes that met LEED criteria in 2017 and plan to create more in their upcoming developments. Those include The Preserve at Adora Trails, Hawthorn Manor, and Rio Paseo. CalAtlantic also incorporated site-specific positioning and energy-efficient features as part of their Houseworks program for thoughtful community planning. That can be seen in communities such as Biltmore Shadows and Arcadia Place.

The future promises more urban innovation for Phoenix. One of the fastest-growing cities in the nation, experts say investment in infrastructure coupled with the region’s economic growth have made this relatively new city into something exemplary. With all the attractions of a major metropolitan city and the affordability to entice a population expected to reach 6.3 million by 2030, Phoenix should remain a robust urban center for years to come.