There’s no question that Nashville’s real estate development has been on a steady incline over the last decade. Mixed-use projects are taking over the city and bold metropolitan efforts, like a new convention center, are sending a message that this city means business.

The latest quarter has been perhaps the most exciting time of all, though, with construction efforts across town seeking to refine the skyline and solidify Nashville’s place as a cosmopolitan southern capitol. It also doesn’t hurt that apartments and condos are being added by the thousands to house the city’s newest residents.

Large corporations like Amazon have decided to put down roots and invest in the city, and a seemingly hopeless project on West End Avenue is getting a new lease on life. Transformations like the one seen in The Gulch are also underway Downtown.

There’s a reason why locals jokingly note that Tennessee’s new state bird is the crane. 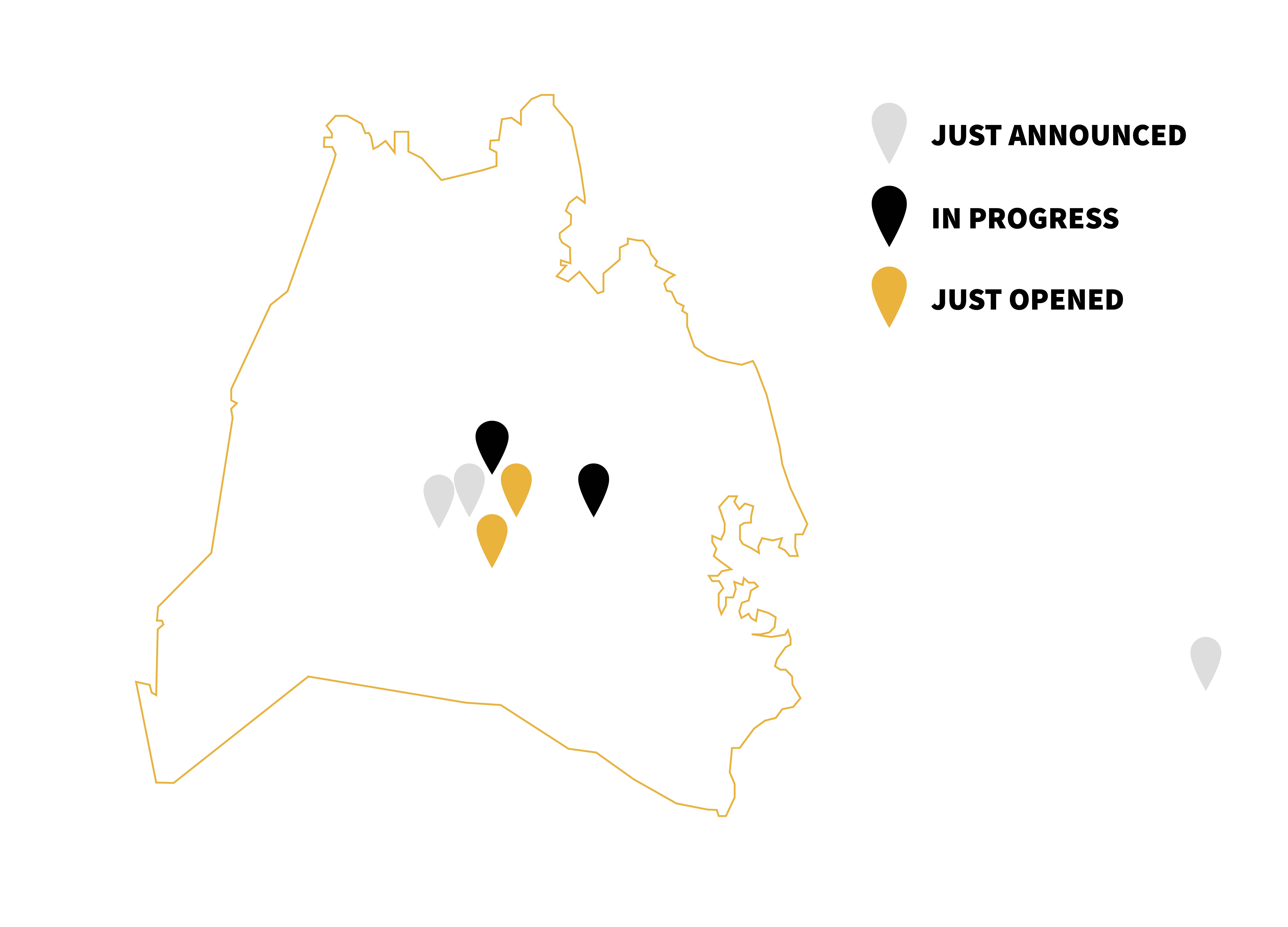 Nashvillians rejoiced in late 2018 when Amazon announced sweeping plans to bring 5,000 jobs to the city and construct an operations center in what ultimately adds up to a $230 million investment. In addition to Amazon offices, the site at Nashville Yards will include hotel, office, retail, and residential space as well as over one acre of greenspace.

Amazon Senior Vice President Jay Carney told USA Today, "[Nashville is] a city pointing toward the future. It made itself very appealing for investment. It's a place where, if people don’t already live there, they are excited about moving there. That's always an important issue for us."

Any Nashvillian who has driven down West End Avenue in the past decade has been utterly dismayed by the failed development that left a massive hole in the ground on some prime real estate near the Broadway-West End split in Midtown.

The excavation, which took place in 2005 and was subsequently abandoned, resulted in a cavernous eye-sore better known as “Lake Palmer” named after Alex Palmer, the developer behind the failed West End Summit mixed-use project. Once seen as an exciting opportunity, the site has been a nuisance for years, but in 2018 a light appeared at the end of the tunnel—or rather, the bottom of the lake.

The Nashville Post reports that Alabama-based Propst Development purchased the site from Palmer for $36.9 million in early 2018. The developer recently announced plans for a massive complex of two towers that will rise 21 and 34 stories above Music City. The $500 million Broadwest project will be comprised of 1.2 million square feet of office, retail, hotel, and residential space with a projected 220 condominium units available.

The latest reporting indicates that construction will begin in the fall of 2019.

In what is perhaps the most welcome development of all, the Nashville International Airport (BNA) is in the process of major renovations and expansion. With the addition of Nashville’s first international flight, which travels to London via British Airways, and a boom in the number of passengers served every year, the airport seeks to update and enhance its infrastructure.

The project is expected to last from five to seven years and will bring expanded terminals, new parking garage facilities, a terminal lobby renovation, and the addition of an international arrivals facility and administrative office. The real question on every Nashvillian’s lips is what will become of the notoriously tacky, but iconic, early-2000s carpet that recently made BNA a viral sensation.

One of the most striking developments of late is the highly anticipated Capitol View project currently underway. The 32-acre mixed-use complex is located just down the street from the Tennessee State Capitol on Dr. Martin Luther King Jr. Boulevard in Downtown Nashville.

The massive complex will pay host to a typical mix of retail and residential space, but Capitol View has an edge on competitors with the newly announced inclusion of a Publix grocery store at the heart of the development. As is typical with many urban landscapes, big-box grocers are scarce downtown, so this is a game-changer.

When it’s all said and done, Capitol View is estimated to cost $750 million with 378 apartments and 130,000 square feet of retail and restaurant space.

City Lights in Downtown Nashville was completed in the last quarter of 2018, and it’s situated atop Rutledge Hill with sweeping views of the cityscape and the Titans’ Nissan Stadium across the river.

The development currently offers condominiums ranging in price from the low $600s to as high as $2.7 million, with an average price per square foot of $514, according to Neighborhoods.com listings. On the larger end of the condo spectrum, the two-to-four-bedroom floorplans and high-end concierge offerings combined with the building’s prime location account for the luxury price tag.

The Chelsea, which technically completed construction in 2016, has converted its residential space in 12 South to condominiums ranging in price from the low $200s to the low $400s. The Nashville Post reports that 20 newly renovated units will be up for sale each quarter as the building rolls out this development. Residences range from studio to one- and two-bedroom floorplans.