The 10 Best Things to Do in Frisco, Texas

Even though Frisco, Texas, is a fast-growing community that has been called the best place to live in the country, the Dallas suburb still retains its small-town vibe. Its perennial popularity is due to its friendly community, top-rated schools, dense collection of shopping and restaurants, and a quaint downtown area where locals congregate.

Residents new and old may wonder if you have to drive 30 miles to Downtown Dallas to find something to do, but there’s plenty going on right in Frisco. It earned the nickname “Sports City, U.S.A.” because it’s home to the Dallas Cowboys and six other sports teams, as well as the future home of the PGA of America’s headquarters.

While much of the action here centers around sports, there’s also shopping, museums, and plenty of Old West charm. Here are the 10 best things to do in Frisco. 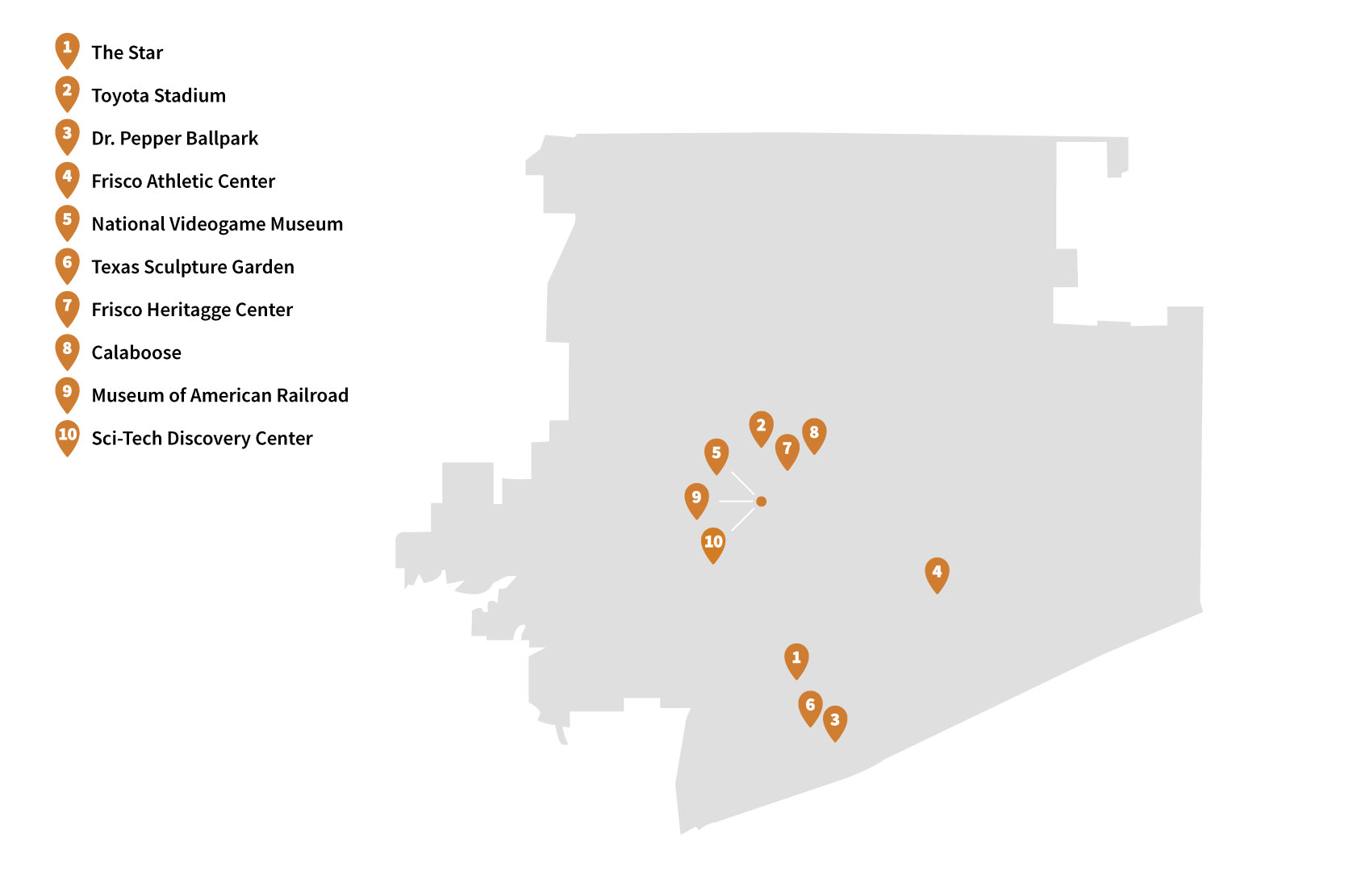 Show Your Love for the Cowboys

The Star in Frisco is the headquarters of the Dallas Cowboys. Not only is it the place where the Cowboys practice, but the 91-acre facility is also a great place for sports fans to visit. They offer regular tours and have other amenities to enjoy, like the Nike Star Walk that chronicles important milestones in Cowboys history and a collection of Super Bowl memorabilia.

Take in a Soccer Match

Frisco also hosts North Texas’ professional soccer team, FC Dallas. The Metroplex is home to a lot of MLS fans, and people come out to support the local team at Toyota Stadium. Whether you’re a soccer fan or have never seen a game, Frisco is a great place to catch world-class soccer.

If baseball is more your style, Frisco also has you covered here. The minor league team the Frisco RoughRiders play at Dr. Pepper Ballpark. Sure, you can catch an MLB Texas Rangers game in Arlington, but sometimes you don’t want to drive that far and deal with the crowds. Supporting a minor league baseball team really adds to the small-town community feeling in Frisco.

Get Active at the Frisco Athletic Center

If you feel like being athletic rather than watching other people do so, the Frisco Athletic Center is a massive complex focused on wellness and leisure. With 100,000 square feet for indoor athletics and a water park to enjoy, this is a great place to spend an afternoon. You can even get a membership to go back again and again.

Enjoy All Things Related to Gaming

If sports aren’t your thing, Frisco has plenty of other activities to offer. The National Videogame Museum is equally fun for kids and kids-at-heart. You can explore the history of video gaming as well as play some games while you’re there. The museum also offers STEM-focused classes on gaming to stimulate the minds of young gamers.

See Some Beauty at the Texas Sculpture Garden

The Texas Sculpture Garden is the largest private collection of contemporary sculptures in the state. It’s not just a small place, either: There are dozens of sculptures surrounded by lush landscaping and water features. It’s very Texan in theme and is a great place to soak up some Texas pride while enjoying the outdoors.

Explore the City’s History at the Frisco Heritage Center

The structure is just 170 square feet, with only two windows and a steel door, and it had no running water or electricity. Only a single prisoner could be kept in it until they were released or transferred to the county jail. It’s an interesting look at an aspect of Texas justice less than 100 years ago.

See Old-Style Justice at the Calaboose

As part of the Frisco Heritage Center, you can also see the Calaboose. The calaboose is a strange word that literally means a dungeon, but it actually served as a very primitive jail from 1912 to 1950. It was a common method for holding criminals throughout the South. The structure is just 170 square feet, with only two windows and a steel door. It also has no running water or electricity. Only a single prisoner could be kept in it until they were released or transferred to the county jail. It’s an interesting look at an aspect of Texas justice less than 100 years ago.

All Aboard for the Train Museum

The Museum of the American Railroad is a must for train enthusiasts. It’s a site that explores the history of trains not only in Texas but in the whole country. It includes vintage train cars and regular exhibits, including “TrainTopia” which is an exhibit of miniature trains.

The Sci-Tech Discovery Center is an educational experience for people of all ages to learn about the practical uses of science and technology. It’s a fun and entertaining place, with exhibits, rotating activities, and a Makerspace where you can use technology like 3-D printers and robotics kits.

//static.neighborhoods.com/blog/media/frisco_heritage_center_july_2016_15_-frisco_railroad_depot-_hero-ed09fda1c5cc46e3b41c826b23bfaeeb.jpg500px1400pxblock party
Back to Homepage