The Story of the American Suburb

Nailing down the dawn of the suburb is a tricky task. Was it an invention in Victorian England, a knee-jerk reaction to the perceived grime and filth of London? How about the postwar construction boom, when cities were no longer able to contain the dramatic uptick in population and private automobile ownership was (rightfully) assumed to be the future of transportation? Is it ok to go all the way back to Ancient Rome, where the term “subura” was coined, which was used to describe the district outside the city center where the city’s working class lived? How about the first guy who decided to sleep a few feet away from his fellow tribesmen to just, like, get away from Robert? 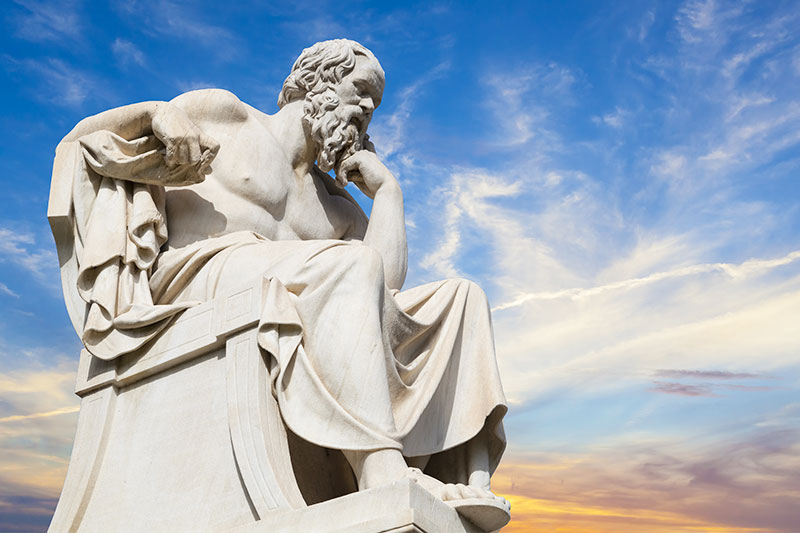 Whatever its origin or however you want to define it, the suburb in North America has alternated between being an ultimate, physical expression of the American Dream to object of derision, with the popular opinion pendulum swinging slightly back in favor of the suburbs in recent years, spurred in some part by a desire for affordability and by efforts of suburban cities themselves to reinvent their image.

Although it is widely assumed that the “modern” suburb grew out of the need for housing for soldiers returning from World War II, the story can actually be traced back several decades earlier and across the Atlantic Ocean, in late 19th-century London.

The source of this idea came from Ebenezer Howard, who was educated in London before moving to Nebraska to own a farm, subsequently bankrupting that farm, and then eventually moving to Chicago to be a reporter in the post-Great Fire era. Howard then moved back to London and became a stenographer for Parliament, which was a job he would hold for a remainder his working days.

You’ll notice that he never was an urban planner by profession. By all accounts, he was just interested in increasing quality of life. Nevertheless, his book “Garden Cities of To-morrow” was not only influential in the city-planning circles, but sparked actual, physical neighborhoods to be built around his ideas. Although unable to find the funds to continue a farm, he evidently had little trouble raising enough to build entire cities.

The gist of the garden city goes something like this: 32,000 people would live on 6,000 acres on a concentric pattern that would alternate between open spaces, public parks, and boulevards. The idea was to escape the squalor of cities at the beginning of the Industrial Revolution (which Howard would have had plenty of exposure to, given the time he spent in London and Chicago) by creating self-sufficient areas that would be a perfect combination of town and country. The intended result was to have economically independent cities with short commute times that also merged the best of country living with the convenience of city life. To accomplish this, Howard proposed having industry separate from residential structures, the “grandfather” of modern zoning laws that would become ubiquitous in the North American suburbs. Howard’s idea proved alluring enough to attract investors.

The first garden city was developed in Letchworth, which today is a part of Hertfordshire, England and it was modeled after the principles laid out in the first chapter of his book. In 1903, the First Garden City Ltd. hired architects and staked out the site for the residential and agricultural areas of the town, the latter of which would be the world’s first planned “green belt.” That same year, a train station opened in the town, allowing Londoners to visit the town out of curiosity or — more commonly — to mock the inhabitants’ idealism and unorthodox lifestyle. This image was only reinforced by the town’s ban on selling alcohol within the garden city’s limits, which only served to boost the sales for pubs in the surrounding areas (for what it’s worth, pubs that were operating prior to the establishment of the garden city were allowed to continue operating, but there were hardly enough to satisfy the entire population. The ban was lifted in 1958).

Despite its lukewarm initial reception, the garden city concept spread, first to neighboring Welwyn then to the rest of the United Kingdom, eventually being adopted in places as far away as South Africa, the Soviet Union, Brazil, Argentina, and, of course, the United States.

But the impact of Howard’s design, at that point, had not been fully understood. The idea was to create a self-sufficient town that equally prized private residences, industry, and agriculture, all paid for by a company who would pay off the mortgage by charging rent to residents, industries, and businesses who moved into the town. Wanting to avoid his garden cities being the target of profit-seeking investors, he called the funding of the town “philanthropic land speculation,” which meant that the investors would receive any interest generated through rent collecting. But, in Howard’s mind, that wasn’t the point.

Howard tried to get money from working-class collectives (they didn’t), so he had no choice but to rely on the wealthier investors with deeper pockets and an appetite for actual land speculation. In order to appease those investors, he had to make some tweaks to his original plan, including eliminating cooperative ownership and replacing it with landlords, who, as it turned out, were suddenly allowed to implement short-term rent increases.

But his vision could still be reality if he hired the right architects (he didn’t). Letchworth’s architects, Raymond Urwin and Barry Parker, were not fans of the rigid structure of the garden city as originally envisioned, essentially abandoning the intended design and instead opting for one that was more “organic.” As a result, the homes were just out of reach for the country’s working class, instead attracting the slightly more affluent middle class. The investors received dividends within a decade and the government, keeping an eye on Letchworth, decided to not provide funds for future garden cities. Welwyn, the second city designed with this concept in mind, was only funded after Howard begged his contacts for money so he could buy the land at auction. Being just 20 miles from London, Welwyn never became self sufficient.

The idea of having a self-sustaining, affordable town outside of major cities should have died after it became obvious that Welwyn would not succeed. But then World War II happened, sending millions of American soldiers overseas. One of those soldiers, William Levitt, returned in 1946 with an idea.

The suburbs were nothing new in postwar America. In fact, in the 1920s (right around the time Welwyn was being developed in England), there was a staggering 900,000 homes per year being built outside of city limits. Although construction on single-family housing was continuing at a rapid pace, it wasn’t enough to solve the severe housing shortage following the return of soldiers from the war. All of a sudden there weren’t enough homes to go around.

“The Levitts certainly did not invent the business of building suburbs, but in many ways, they perfected it,” reported Crystal Galyean in an article for U.S. History Scene. They accomplished this by taking the methods that revolutionized factory labor (as in, the division of it) to the homebuilding business. Instead of having a team of construction workers build a house from the ground up, each worker was trained to do a single task at each house. At its peak, rumor has it, the development was able to build a house every 16 minutes. This led William Levitt to declare with pride that “we are not builders. We are manufacturers…the General Motors of the housing industry.”

Because of the ease and efficiency of construction, the Levitts’ housing community was affordable (the first homes sold for $7,990) and, thanks to stringent controls over the homes and appearance of the community, intentionally bucolic. By designing the streets in such a way that they followed a grid-like pattern, Levittown was built specifically to not remind residents of the nuisances and annoyances of urban life, directing drivers who were passing through to the most efficient route out of the neighborhood. Housing rules even stipulated that residents could not hang laundry outside their homes to dry.

But those rules seemed to do little to stem the development’s popularity. By 1960, Levittown boasted a population of 65,276. Its popularity was helped now only by the spectacle of the whole thing and the returning veterans who started families, but also the 1948 Housing Bill, which freed up billions of dollars in credit for new homeowners. Franklin Delano Roosevelt, who died two years before the opening of Levittown, said that “A nation of homeowners, of people who own a real share in their land, is unconquerable.” If that’s true, then Levittown was the country’s first line of defense.

The growth of the suburbs was by no means inevitable, spurred on by economic, cultural, and governmental policies. The Federal Aid Highway Act of 1956 led to the creation of 41,000 miles of interstate over a 10-year period, making it easier for people to live farther from work. The postwar economic boom meant more people could afford homeownership and, with the perceived decay of the cities in full swing, they wanted those homes to be as far from the urban center as possible, but not so far as to be inconvenient for commuters. The 1960s also oversaw the country’s longest interrupted period of economic expansion. This helped recently established companies like McDonald’s (1955), Domino’s (1960), and Walmart (1962) to establish a foothold in the new American suburban community. The founding of Visa (1958) probably helped the new-found middle-class to afford all these new luxuries.

The popularity of the suburbs surged in the following decades.  By 2010, more than half of the U.S. population lived in suburbs. 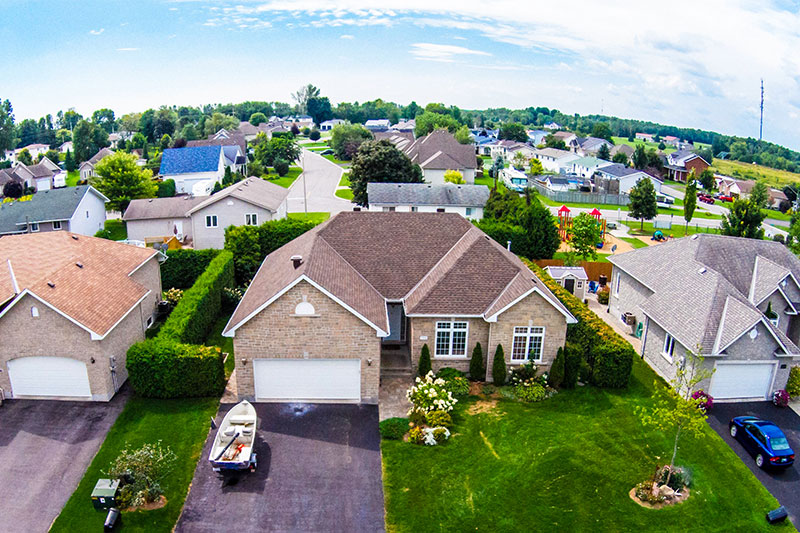 Even though the suburbs became popular places to live, their mass-produced reputation led people to describe them as being bland, lacking character, and soulless. Rather than being an entry point for homeownership, the suburbs became the embodiment of American commercialism. In 2011, for the first time in nearly a hundred years, urban population growth outpaced suburban growth. After all, this is the place that invented the idea of having a McDonald’s inside a Walmart.

But the suburbs are fighting back. Creating dynamic downtown areas, luring some of the country’s best restaurants, and continuing to offer stellar school districts and affordable homes will maybe be enough to reverse the trend. As millennials start to seek out homes for the first time — and still shaking off the effects of the most recent economic crisis — the suburbs are looking like a more enticing option, which are doing what they can to attract the newest generation of homebuyers.

Whether the suburbs are a part of the “American Dream” of the future is yet to be determined, but there’s no denying that it made the American Dream possible.

//static.neighborhoods.com/blog/media/hero2-898dbe30b4a1d0e5b57afdfcefe401ea.jpg500px1400pxblock party
Back to Homepage