The Red and Blue Lines are the CTA’s busiest. Thousands of people rely on these ‘L’ lines to get them to and from work and around the city. While each Chicago neighborhood has its own distinct character, Red Line and Blue Line neighborhoods are common modes of classification—passionate feelings makes something of a rivalry between the two groups.

Both transit routes cut right through the heart of the Loop. The CTA Red Line runs north and south between its 95th/Dan Ryan and Howard stations. On the other hand, the CTA Blue Line runs east and west between Forest Park and its downtown stations before curving to travel in a northwestern line up to its final station at O’Hare Airport.

Both CTA lines run 24 hours a day, converge on the Loop, and offer access to various transfer points to other lines. This guide to popular neighborhoods off the two transit lines might help you decide on the Red vs. Blue debate. 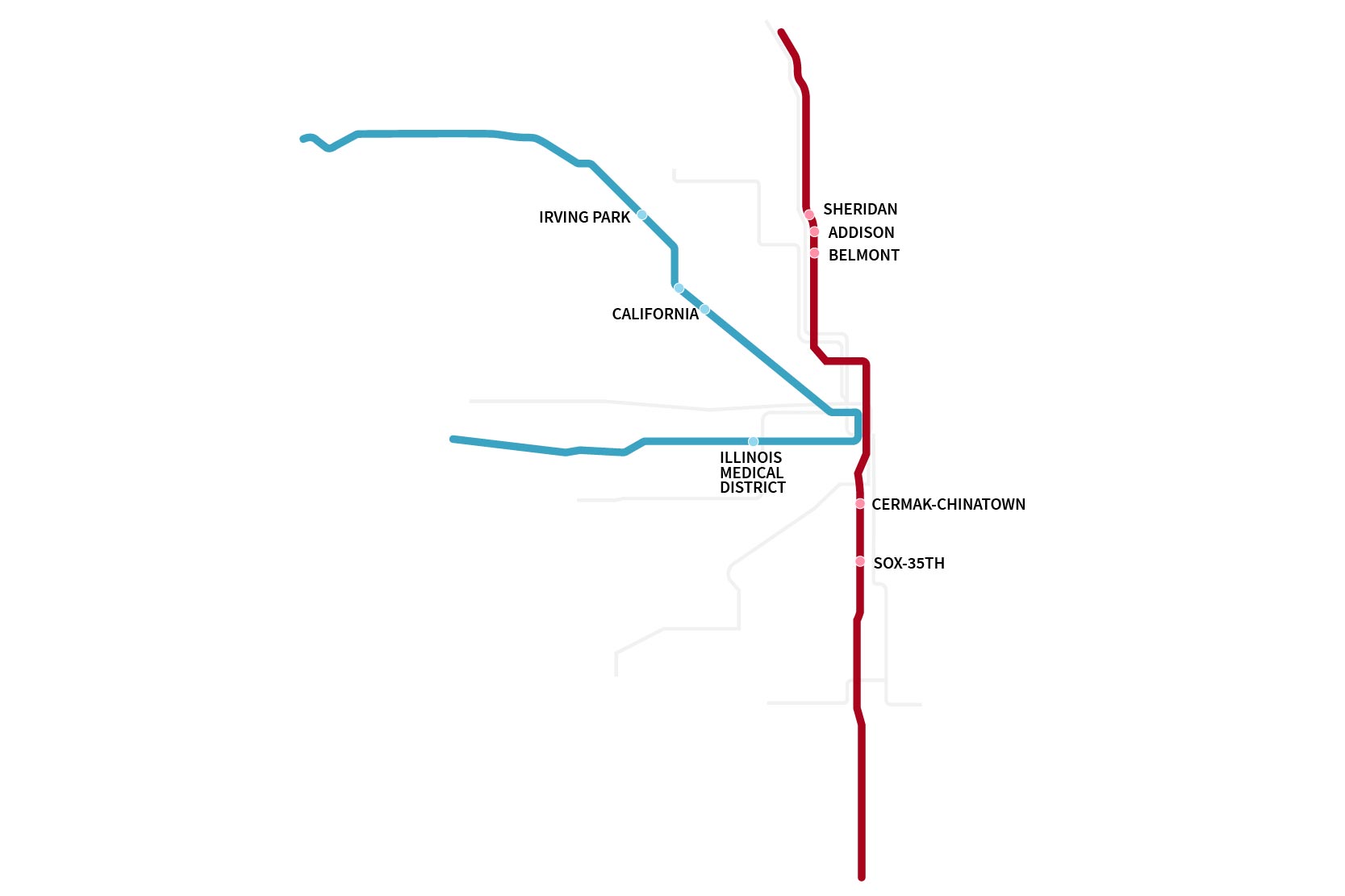 The CTA Red Line runs parallel to Lake Michigan. Hop off at nearly any Red Line station and the lake is most likely just a few blocks away. Here are some major Red Line neighborhoods:

Step off at the Cermak-Chinatown stop and you’ll find yourself in the South Side neighborhood of Chinatown. Known as the epicenter of Chinese culture in the city, Chinatown Gate marks the entrance to a maze of delicious restaurants and eclectic shops selling nearly anything you could imagine.

A short walk east of the neighborhood will take you to the lake, but that isn’t your only waterfront option—the Chicago River serves as the western border of Chinatown. When it comes to living here, most homes are attached. Some Red Line neighborhoods have a reputation for expensive living (think Lincoln Park), but Chinatown has a reasonable median sale price of in the high $200s, according to Neighborhoods.com data.

As the neighborhood’s CTA stop suggests, Bridgeport is home to Guaranteed Rate Field and the Chicago White Sox. Like Chinatown, this neighborhood is just south of the Loop—offering ready access to downtown without the high price tag.

The median sale price in the neighborhood is in the mid $300s. If you’re looking for a little more space when settling down, this South Side neighborhood has good amount of single-family homes. While a magnet for baseball fans, the neighborhood also has a strong cultural presence with numerous art galleries.

Lakeview is one of the city’s most popular neighborhoods. Highly accessible, Lakeview encompasses the pocket neighborhoods of Wrigleyville and Boystown.

In this community, you have your pick of quiet, residential streets; late-night bars; boutique shopping; and game day fun. Plus, Lakeview sits right on the lake. Given its popularity, this neighborhood has a fairly high median home sale price in the low $400s. But, given the diverse range of home types and sizes, it’s certainly possible to find something that will fit your budget.

The Illinois Medical District is named for its large healthcare presence, but the neighborhood is becoming more than just hospitals and doctors' offices. You’ll find plenty of attached homes—both condos and townhomes. Plus, new development is helping rewrite the neighborhood. The multi-million-dollar “Gateway” project is moving forward with its plans to provide residential towers, retail space, office space, and hotel rooms.

While increasing development will likely mean more attention, the Illinois Medical District is still an affordable neighborhood with a median home sale price in the low $200s. The CTA Blue Line station and ready access to I-290 make the neighborhood a popular spot for commuters.

Logan Square rests easily near, if not at, the zenith of cool Chicago neighborhoods. Accessible via two Blue Line stations, Logan Square is a mishmash of historic architecture and new development. Logan Boulevard is a beautiful tree-lined walk with a selection of homes that are made for the real estate daydreams of passersby, while new condo buildings rise along the neighborhood’s major streets like Milwaukee Avenue.

With its restaurants, coffee shops, and bars, Logan Square tends to attract a hip crowd who adore the fun neighborhood vibe and the easy commute downtown. Plus, the Blue Line will take you to other popular Blue Line neighborhoods like Wicker Park and Avondale. Routinely making the “hot” list for Chicago neighborhoods, the median home sale price in Logan Square is in the low $400s. Yet, the neighborhood’s mix of attached and single-family homes covers a wide range of price points.

The neighborhood is marked by residential streets of both single-family homes and attached homes. The median sale price in the neighborhood is in the high $300s, making it more affordable than many Blue Line neighborhoods closer to the Loop. Yet, Old Irving is close enough to downtown that a daily commute isn’t unmanageable.

Though it does have residential charm, the neighborhood doesn’t completely lose its urban flavor. For example, you can get a craft cider from ERIS Brewery and Cider House within walking distance from the Blue Line.

There’s no objective answer to the question of “Red Line or Blue Line neighborhoods?” Yet, once you pick one, you may find yourself passionately defending the merits of your chosen line.