After living in the Seattle area for five years, my wife and I packed up a moving truck and made the questionable decision to move to Chicago in December 2016. However, aside from a particularly dicey drive through Coeur d'Alene, Idaho and some crazy wind gusts outside of Bozeman, Montana, it was a relatively uneventful drive. We made it to our new apartment in Ravenswood Manor in a few days and spent the next nine months living there before recently moving to a new place in Lakeview.

A year in Chicago isn’t nearly enough to know everything. In all honesty, it still feels like we’re scratching the surface when it comes to all the great restaurants, cool bars, neighborhood hot spots, and fun things to do. But, a year is enough time to learn a few things about a city. Specifically, to learn about the region of the city we’ve lived in and spent the most time in since moving here: The North Side.

Some of those learnings are specific to the neighborhoods of the North Side, some of them are about Chicago itself. All of them are my personal opinions, which are known to be wrong and/or misguided from time to time. And if you disagree with me about any of these, in the words of The Dude, well, you know, that's just, like, your opinion, man.

Chicago Has City Pride Out Its Wazoo 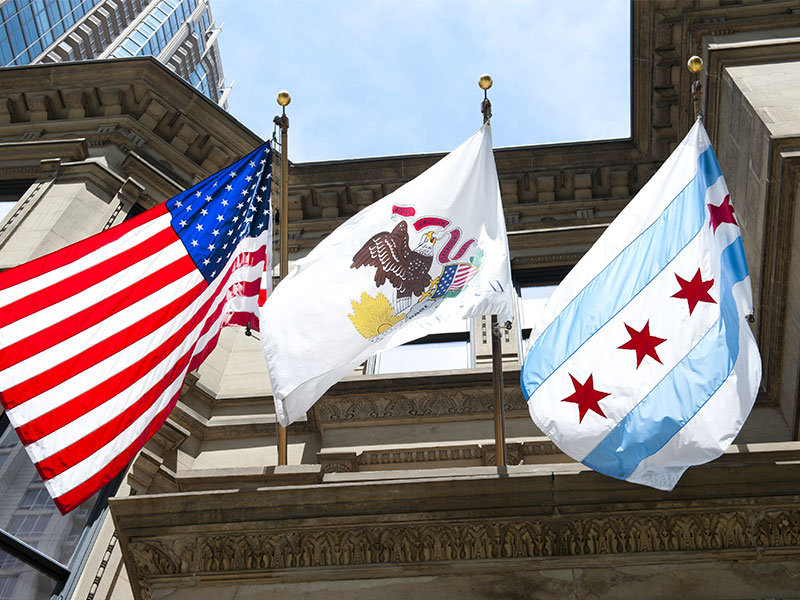 I grew up close to and spent a few years working in New York City. I spent eight years in Los Angeles. I spent another five years in or near Seattle. I’ve spent time in plenty of cities in between. And I can unequivocally say that I have never met a city that has as much pride in itself as Chicago.

Chicago Also Has a Lot of #HotFoodTakes 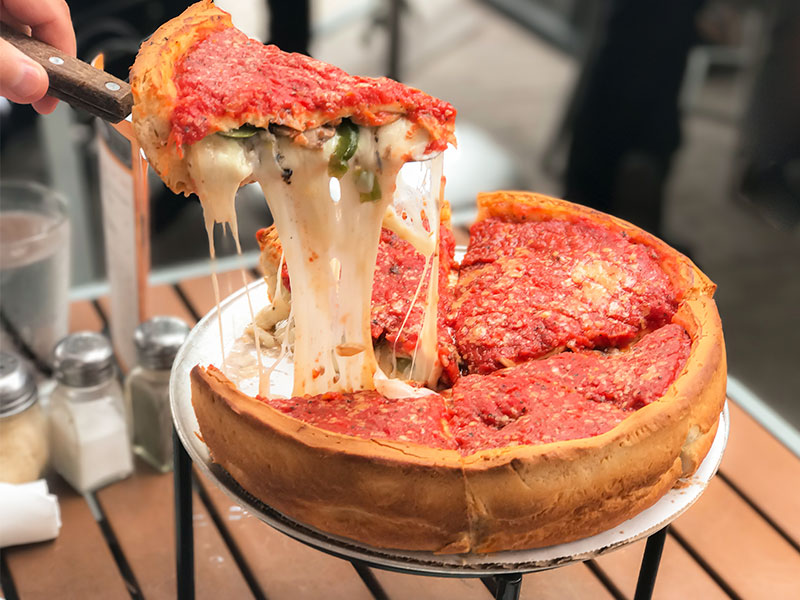 Part of the whole Chicago pride thing is that Chicagoans are very excited to tell you about all the amazing things to do and see and try. That’s great when you’re looking for something to do or asking for recommendations. It can be a bit much, however, when it comes to foodstuffs.

People here will be on your butt until you try deep dish pizza, Italian beef, Chicago hot dogs, and Malort. If you’re dumb enough to admit out loud that you’ve never tried any of them, you will be accosted (in the nicest, most Midwestern way possible) until you do. And they will be happy to chaperone you to the nearest eatery or bar in order to do so.

Unfortunately, that Chicago pride can drive expectations through the roof. They talk about eating deep dish pizza like it’s some kind of cosmic, indescribable experience. They make it sound like you don’t truly understand the meaning of life until you eat one of these sandwiches.

Here’s the thing. All of these food items are good. They’re good because, well, pizza is good. Beef sandwiches are good. Hot dogs are good. Are any of them as good (or, in Malort’s case, as bad) as they’ve been made out to be? Of course not. Nothing could be. For Chicagoans, those meals come smothered in a nostalgic glaze that I will never be able to taste. So, to me, they’re just pizza, hot dogs, and sandwiches. And that’s fine. They’re fine. They’re all fine (except Malort, which is not fine, but also not that bad). Everyone chill.

Also, if anyone ever gives you guff about not liking deep dish, the research shows that most of them don’t eat it all that often either.

C.R.E.A.M. (Cubs Rule Everything Around Me)

I moved to Chicago three months after the Cubs won their first World Series in 108 years, so the only North Side I’ve ever known is one where they’re among the most dominant teams in Major League Baseball and a fixture in Chicago culture. The only thing you’re more likely to see around here than the flag of Chicago is a Cubs logo. Doesn’t matter the time of year, either. You could be standing in Wrigleyville in July, Roscoe Village in December, or Lincoln Square in February and it’s guaranteed that at least 40 percent of the people around you are in Cubbie blue.

You might be surprised to learn that there is a second professional baseball team in Chicago. Apparently, there is something called the Chicago White Sox that play the same sport in the same league down in Bridgeport. Or so I’m told. Because, and I swear I’m not trying to be hyperbolic, I don’t think I’ve ever seen anyone on the North Side wearing White Sox gear. I don’t think I’ve ever even heard someone speak of them. I can’t tell how much of that is Cubs oversaturation and how much of that is the territoriality of the two baseball franchises, but it’s sometimes jarring to think that I saw more White Sox gear living in New Jersey than I have living in Chicago for a year (granted, it was the early 1990s and black-colored sports gear was very in fashion, but still).

You Don’t See Much South Side 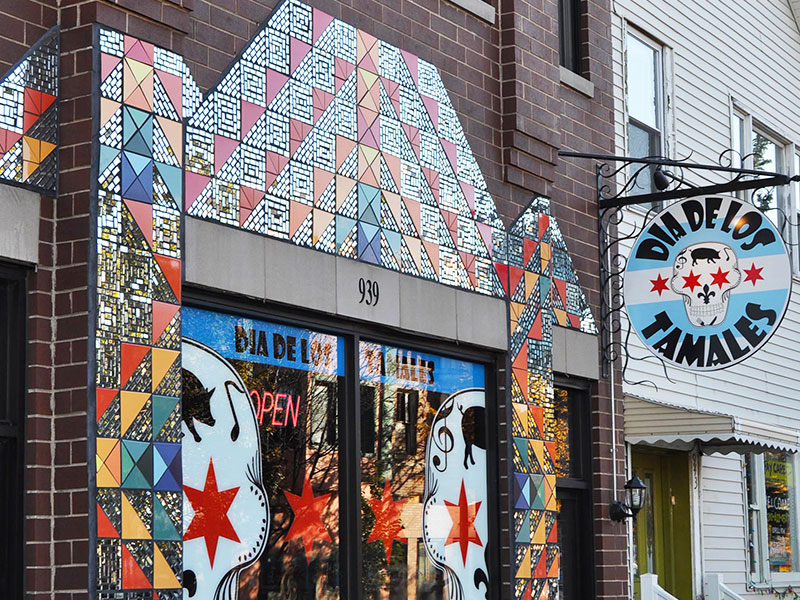 That does lead into an unfortunate side effect of North Side living, which is that you don’t end up making enough time for the South Side. Well, I can only speak for myself. Perhaps the young folk are heading down there more often, but the 30-something crowd seems much less likely to make the trek. And shame on me for that, because I know there are so many good reasons to head down there. Double shame on me for knowing about all those delicious tacos in Pilsen and not trying any of them yet. Perhaps I needed a year to get to know my immediate surroundings, but the plan for the second year is to discover the other half. Especially now that someone bought me a pie from Pleasant House Pub. My goodness...

Maybe it’s because I moved here from the Pacific Northwest, but the most jarring part of Chicago life, especially on the North Side, is the little regard that drivers have for pedestrians. It took me a while to re-learn that a pedestrian walkway does not actually mean “pedestrians have right of way to walk here” but in fact means “pedestrians better wait until all the cars have passed and even then you might want to book it because we’re not slowing down for you.”

Coming from a place where drivers not only give pedestrians right-of-way but do it to a sometimes annoying (but still appreciated) degree, the lack of space, awareness, and care that many North Side drivers have for their fellow denizens feels uncomfortable (especially considering they’re pretty nice when outside of the car).

Unfortunately, it’s made me distrust Chicago drivers more than any other city I’ve lived or worked in. Sure, NYC drivers are intense, but there’s an unspoken code of conduct between drivers and pedestrians there. Green light means cars can do whatever they please. Red light means pedestrians can do a dance in the middle of the street for all anyone cares. So long as the two parties keep to the rules, everyone gets it. In Chicago, I’m not sure drivers know the rules half the time. Or care.

I don’t think I fully understood the situation until the day I watched a school bus pull up to a stop sign, creep up on a pack of schoolchildren as they crossed the street in front of the bus, and then hit the gas pedal and tear through the intersection before the kids were out of the street. That’s cold, Chicago.

Ultimately, I have an endless supply of death-stares to hand out as I walk my dog through a crosswalk and a turning car inches up on us, and I will continue to dole them out as needed.

Cyclists Aren’t Much Better (But the Cycling is Great)

If you don’t like cyclists, I understand. Hell, I’m a cyclist and I get annoyed by cyclists a lot of the time. I watch them blow through red lights, ride the wrong way down one-way streets, and fail to yield to pedestrians on a daily basis. But, I promise, we’re not all monsters (so please don’t swerve into us).

The North Side is well-suited for cyclists with plenty of lined pathways on major arteries, shoulder space on side roads, and easy access to multiple trails. The most obvious one is the Lakefront Trail, a go-to destination and commuting path for bikes. In the summer, you can’t beat the views (but you’d do well to pick your times wisely, lest you spend the afternoon weaving in-between walkers, joggers, and dogs).

But the beauty of the area is that you don’t need to head east to the most popular trail to get around. The North Side is a grid (for the most part) and cars tend to give cyclists a bit more respect than pedestrians (but wear a helmet all the same). It’s simple to bike the streets here, whether you’re in Albany Park, Avondale, or Lincoln Park.

The CTA is Way Better Than You Think

Living in Los Angeles and Seattle before this, I can’t tell you what a godsend Chicago public transit is. Yes I know, it’s annoying when your bus doesn’t come exactly when Google Maps says it’s supposed to and nobody likes to hear that their train is delayed, but for the most part, Chicagoans don’t know how good they’ve got it.

Living in Ravenswood Manor, the Brown Line was a dependable, safe way to get around, though if you’re trying to go north without using buses, the trip south to Belmont to switch to the Red Line does feel a bit like a waste.

Meanwhile, living in Lakeview means easy access to the Red Line and a dependable bus line on every major street. It’s never a question of how to get where I’m going, but which route to consider, and that’s awesome.

Of course, it’s not all rose petals and rainbows using CTA. You still have to deal with people and people can be, well, people. You learn very quickly that there’s a science to where you stand or sit on the train during rush hour, especially if you need to switch trains at some point. It’s a lot of trial, a lot of error, a lot of “sorry, excuse me,” and a lot of noticing that every single person around you is glued to their phone.

That also includes the dudes (it’s always dudes) standing in the doorway who refuse to move to let people exit or enter the train easily. In that instance, you’re well within your rights to lower your shoulder and drive through. Maybe that’s just the Jersey in me talking, but all’s fair in love, war, and 8:30 a.m. CTA rides.

Here now, based on science, the definitive ranking of all the North Side Brown Line stations. Don’t @ me.

Perhaps it doesn’t have the depth of craft brewery options like Denver or San Diego, but Chicago holds its own in that department. That’s especially true in the North Side where I’ve found that one is never too far from a good beer option. It goes without saying that making the rounds on Malt Row in Ravenswood is a requirement. Not that it’s a tough ask given the quality and selection at Half Acre, Begyle Brewing, and Band of Bohemia. There’s also DryHop in Lakeview for a change of pace. The way I was introduced to many of these breweries, and others, was the Ravenswood on Tap festival, an easy day of sampling and tasting held in June.

If I’m looking for more options, Beermiscuous in Lakeview and HopLeaf in Andersonville always have new and interesting beers to try. And whenever I want to stock the fridge, I try to make a stop at Bottles and Cans in North Center to find something new.

If You See a Lincoln Towing Truck Coming Towards You...