Downtown Chicago is made up a collection of neighborhoods: River North, the Magnificent Mile, and the Gold Coast among them. But when you hear “downtown,” your mind likely jumps to the Loop and its sister communities the South Loop and the West Loop.

These three neighborhoods may have similar names, but they offer unique living experiences. Find out what separates the Loop, South Loop, and West Loop. 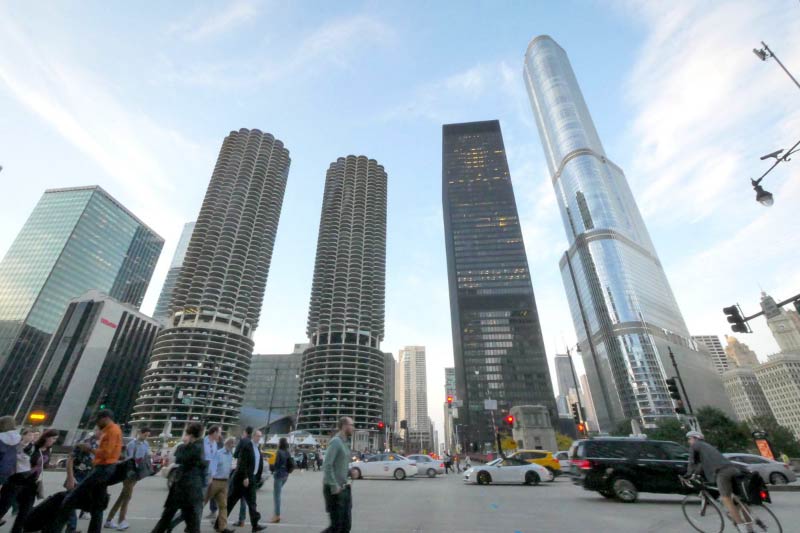 The Loop is Chicago’s main business district. On any given weekday, the streets of this neighborhood will be full of businesspeople rushing to their offices and downtown lunch meetings. Though the neighborhood is filled with towering office buildings, it isn’t all about work. Many of those skyscrapers are also residential buildings with an impressive view.

For anyone who wants to live in luxury, the Loop is a good place to start looking. This neighborhood is home to a large collection of upscale condos overlooking the Chicago River and Lake Michigan. Given the central location and tendency toward luxury homes, the median sale price in the Loop is $369,500, but prices can soar as high as over $4 million, according to Neighborhoods.com listings.

The Loop is one the most navigable neighborhoods in the city. In fact, it’s much easier to take public transit, walk, or bike in the Loop than drive—plus, finding and paying for parking here is almost always a challenging and pricey endeavor. WalkScore rates the neighborhood’s walkability as 93 out of 100 and its bikeability as 80 out of 100.

When it comes to public transit, the Loop is eminently accessible with seven of the CTA’s eight ‘L’ lines converging in and looping around the neighborhood. Plus, you can easily catch a bus on one of the multiple routes running through the Loop.

Though crowded and alive with activity during the day, the Loop tends to be a quieter neighborhood at night, especially compared to some of the more residential neighborhoods further from downtown. Yet, that doesn’t mean there’s nothing to do. The Loop is home to the city’s Theatre District, the Art Institute, Millennium Park, and the Riverwalk. These iconic features make the Loop one of the city’s most popular tourist destinations.

Given how many people work, live, and visit the Loop, you’ll never struggle to find a place to eat or grab a cup of coffee. You can do both at the Chicago Athletic Association complex, a historic building across from Millennium Park which includes the perennially popular chain Shake Shack and a Fairgrounds coffee shop among the many bars and restaurants. Just be prepared for a wait at peak meal times.

The South Loop is the residential counterpart of the more business-centric Loop. The buildings still tend to be high-rises and skyscrapers, but more of the units are condos rather than offices.

The homes for sale tend to run more toward the luxury side of the market, but the median sale price ($342,000) is slightly lower than in the Loop. If you’re in the market for something more budget-friendly, there are condos for sale sitting closer to $100,000. On the opposite end of the spectrum, you can spend upwards of $5 million for a South Loop home.

Out walking in the South Loop, you’ll notice college campuses and, of course, one of the city’s biggest cultural attractions: Museum Campus. The South Loop also includes Grant Park and a large swath of lakefront space, making such a dense, downtown neighborhood surprisingly green.

While not the restaurant mecca the West Loop is, the South Loop is a short car ride or Red Line trip away from all the restaurants and culture of Chinatown.

Out of all three neighborhoods, the West Loop is currently at the zenith of Chicago cool. New condo buildings and office towers are going up at warp speed. It seems like this formerly industrial neighborhood is reinventing itself again and again overnight.

Given how developers and homebuyers are clamoring to stake a claim in the neighborhood, buying in the West Loop is the priciest option of the three neighborhoods. The median sale price here is $475,000. Much of what you’ll see for sale falls into the categories of newer and upscale.

Walk Score ranks the West Loop as the second most walkable neighborhood in the city, which makes this spot a haven for the avid pedestrian. Like the other two Loop neighborhoods, driving and parking here is an exercise in patience. You can easily run your errands on foot or on your bike.

The West Loop is also served by Ogilvie Transportation Center, which is ideal for anyone commuting out to the suburbs for work. Plus, residents can step just outside the bounds of the neighborhood to catch the CTA Blue, Green, and Pink Lines.

Among all of the condo buildings and company headquarters, there’s some of the city’s best nightlife. Fulton Market, a pocket neighborhood within the West Loop, has Restaurant Row on Randolph Street. Restaurants here pack in crowds on a nightly basis—tables are hardest to grab at Girl and the Goat and Au Cheval.

You can even catch live music at spots like City Winery and Bottom Lounge. The West Loop puts a trendy twist on quite a few of its other spots, like Brooklyn Boulders, an indoor rock climbing gym, and PanIQ, an immersive take on the popular escape room concept.

Whether you feel the pull of the Loop, South Loop, or West Loop during your homebuying journey, it’s good to know that you can easily enjoy all three neighborhoods thanks to their close proximity to each other and excellent public transit.