South Florida cities Fort Lauderdale and Miami may be only about 30 miles away from each other, but for many, they couldn’t be further apart.

“Honestly, Fort Lauderdale and Miami are two different worlds to me,” says Mimi Stocker, a graduate student at the University of Florida, who grew up living between the two cities. “Fort Lauderdale offers more of a suburban landscape whereas Miami is very bustling and fast-paced.”

Sure, they both have beaches, murals, and major airports. They even have the Brightline, a luxury bullet train connecting the two cities in under 40 minutes. But locals like Stocker know living in one or the other comes with pros and cons.

Here’s a breakdown of the two cities.

Miami is an expensive place to live: The cost of living in the city is 37.10% higher than the national average, and housing prices are a big part of that.

The Miami neighborhood with the most homes for sale is Downtown, with over 2,000 properties on the market and a median sale price in the mid $300s, according to Neighborhoods.com. Some of the lower priced homes, clocking in between $200,000 and $400,000, are located in neighborhoods like Model City, Flagami, and Little Havana. With a median home price of over $1 million, Coconut Grove is Miami’s most expensive neighborhood.

Meanwhile in Fort Lauderdale, property values have a strikingly wider range, with median home sale prices dipping as low as the $60,000s, but as high as more than $4 million. Homes are most plentiful in Downtown, Victoria Park, Coral Ridge, and Central Beach.

The cost of living in Fort Lauderdale is still higher than the national average by 29.6%, but development there is booming, especially in Downtown.

Although you’ll find fewer options for affordable homes in Miami, it does have a higher number of condos. Neighborhoods.com currently lists over 4,900 condos for sale in Miami, while Fort Lauderdale lists over 1,400. Condos can often provide a more affordable option in expensive neighborhoods, but be forewarned: Miami is known for luxury condos with lavish amenities.

WINNER: While the two have costs of living that are higher than the national average, you’re likely to find a larger number of affordable options in Fort Lauderdale.

Multiple Miami-based high schools made U.S. News and World Report’s ranking of the top 10 high schools in Florida, while none from Fort Lauderdale made the cut. Fort Lauderdale has fewer than 10 schools with 7 or higher ratings on GreatSchools, while Miami has considerably more options for top-rated public schools.

When it comes to higher education institutions, Miami beats Fort Lauderdale in that category too. Fort Lauderdale has about 20 colleges, universities, technical centers, and institutes while Miami has almost double.

Major universities in Miami include the University of Miami, Florida International University, and the New World School of the Arts. In Fort Lauderdale, the big schools include Nova Southeastern University, Broward College, and Keiser University.

WINNER: Miami is the clear winner this round for high-quality schools—plus it has a larger number of higher education institutions. 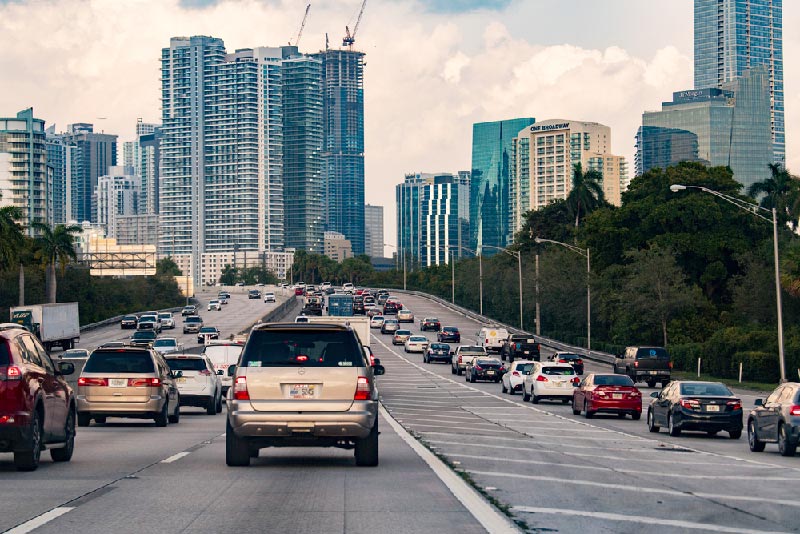 One thing Mimi Stocker will tell you about driving in Miami versus Fort Lauderdale—the traffic in one is way worse than the other.

“A huge con of Miami is the traffic. I absolutely hated it,” she said. “It seemed like at any time of day, you'd get stuck in traffic somewhere.”

If you want to avoid driving altogether, both cities offer a range of public transportation including buses, rideshares, trollies, trains, and as mentioned earlier, the Brightline high-speed train.

Miami-Dade County and Broward County, which encompasses Fort Lauderdale, both have connected bus systems with routes throughout their respective cities. But Miami-Dade Transit is the largest transit system in Florida and the 15th largest in the country.

Both counties also offer a low-cost train that runs throughout the day and makes stops throughout the tri-county area. In Miami, the train is referred to as the Metro Rail while in Broward, it’s the Tri-Rail. The Tri-Rail and bus systems both have routes to get to both cities’ airports. 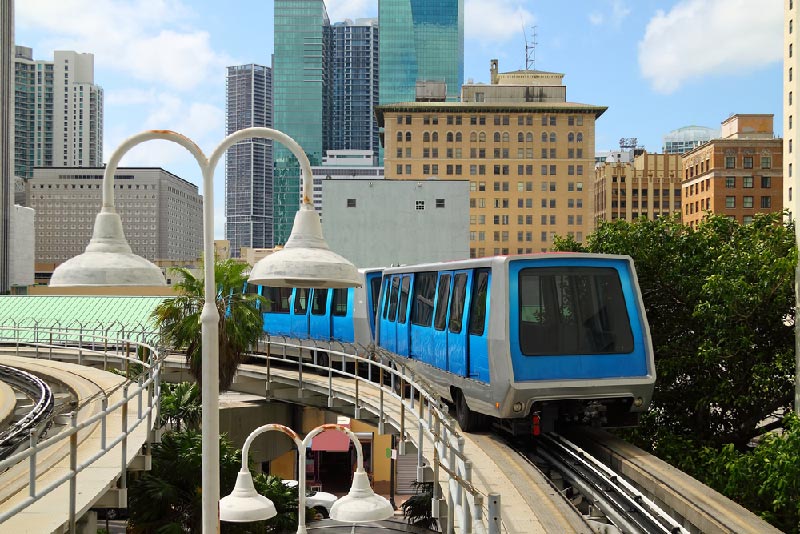 Though neither city is the absolute easiest for living a carless lifestyle, both have become more accommodating in recent years. WalkScore overall ranks Miami as “very walkable” and lists it as the fourth-most walkable large city, right behind New York, San Francisco, and Boston. The Miami neighborhoods with the best WalkScores are Downtown, the Wynwood-Edgewater area, and Little Havana.

Conversely, WalkScore considers Fort Lauderdale “somewhat walkable.” However, in 2017 Forbes ranked it as one of the best cities to live in without a car.

Both cities are also bike-friendly with bike lanes and bike-sharing programs as well as rentable electric scooters, which recently hit Fort Lauderdale.

WINNER: Well, it’s kind of a tie: If you’re a driver, Fort Lauderdale wins for having less traffic. If you want to go carless, Miami is more walkable. But both cities offer well-connected public transit and other ways to get around without a car. 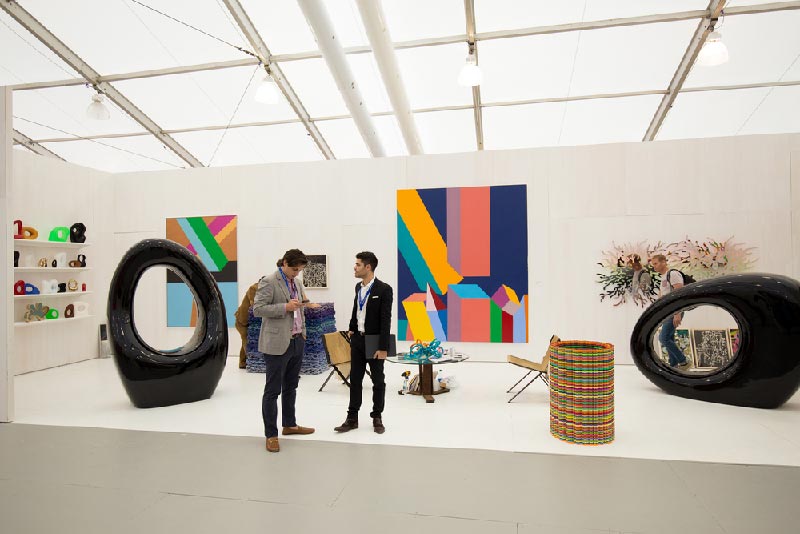 If you ask Mimi Stocker, Miami is the original cultural hub, with cities like Fort Lauderdale following its lead.

Christiana Lilly, an editor for a magazine in Boca Raton, agrees that Fort Lauderdale seems to be a step behind Miami sometimes, using the example of big chain retailers like H&M opening a store in Miami before Fort Lauderdale.

“The pros of living in Miami is that it's a much bigger hub for new experiences. Broward [County] seems to be overlooked a lot,” she says. “I’m not sure why, but [Miami-Dade County] seems to get things first a lot of the time.”

Home to Art Basel and neighborhoods like Wynwood that are filled with colorful murals, Miami is well-known as an art hub. But Fort Lauderdale neighborhoods, like Flagler Village (which includes the Flagler Arts and Technology District aka FAT Village) and the larger MASS arts district, are burgeoning enclaves with small businesses and local artists who are putting the city on the culture map. 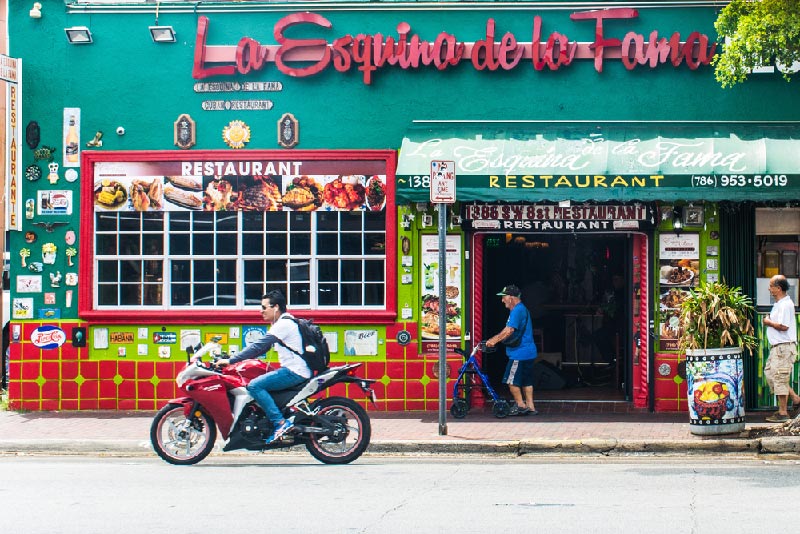 As for food, Miami has no shortage of Cuban specialties including walk-up windows serving cafe con leche and pastelitos around every street corner. The strong coffee and multitude of pastries were one of Stocker’s favorite parts about living in the city.

“Living in Miami, I was being able to grab a quick pastelito and colada at almost any gas station,” she said.

That famous Latin comfort food can be found throughout the city at institutions including La Carreta, Islas Canarias, and Versailles, the self-proclaimed “world’s most famous Cuban restaurant.” Little Havana is obviously the go-to Miami neighborhood for Cuban food.

Meanwhile, in Fort Lauderdale, Stocker noted that the cuisine is more seafood heavy.

“There's also more of an emphasis on boating and fishing culture,” she said. “When I think about the food in Fort Lauderdale, my mind goes to seafood places.”

Southport Raw Bar, Kelly’s Landing, and Boathouse are all dockside mainstays where you can enjoy the freshest catch. Also, Downtown Fort Lauderdale is becoming a walkable hub of restaurants serving all types of cuisine.

WINNER: If you’re a culture vulture and foodie who loves taking in art, scouting out authentic ethnic food, and being the first to try the new trends, Miami is your pick. 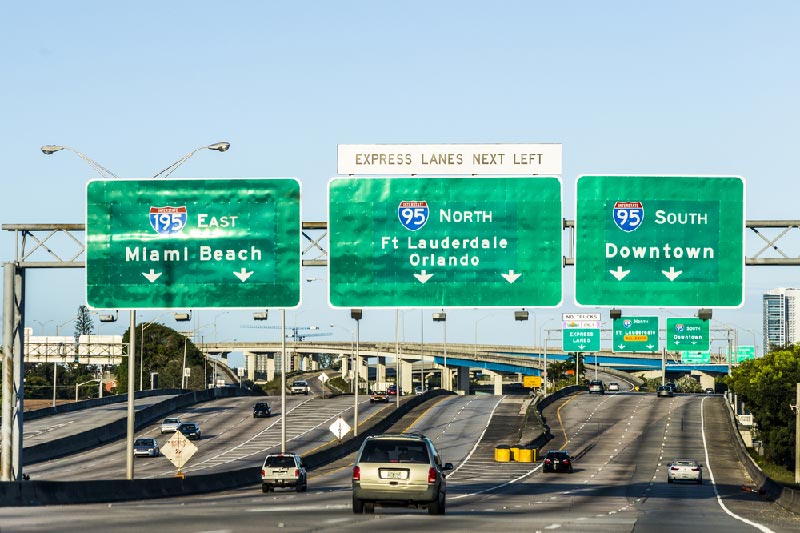 “Where do I like living better? Broward County,” Christiana Lilly said. “I like being central in South Florida, making Miami just as accessible to me as West Palm Beach whenever there's cool things going on. There's also much less traffic, and while there's no equivalent to South Beach, there's still so much to do.”

Plus, Miami is always just a short train ride away.

“If I had to choose now, I think I’d live in Fort Lauderdale due to its chiller pace and more housing options,” Mimi Stocker said. “I’d rather live somewhere quieter and have the option of visiting Miami if I was in the mood.”