New development continues to roll out at a steady clip in Chicago. Some of the most closely followed and widely covered developments are springing up along the Chicago River. The industrial days of the North Branch are quickly fading in favor of trendy, mixed-use development, while projects like the River District in River West and the Riverline in the South Loop are redefining what the downtown stretch of the river looks like.

In the past few months, a few clear trends—aside from the wealth of riverfront projects—have emerged in Chicago development. First, several new projects are popping up with the ambitious intention of creating entirely new neighborhoods. Of course, the 78 and Lincoln Yards—both still in progress—have been at the forefront of that trendy wave, but there are more projects looking to make new neighborhood names.

Developers are also are proposing and working on projects that could revitalize a number of existing neighborhoods. And development news isn’t just for the city. A number of major suburban projects are on the horizon.

From the neighborhoods of Chicago and out to the burbs, let’s drill down into the latest on the city’s developments. 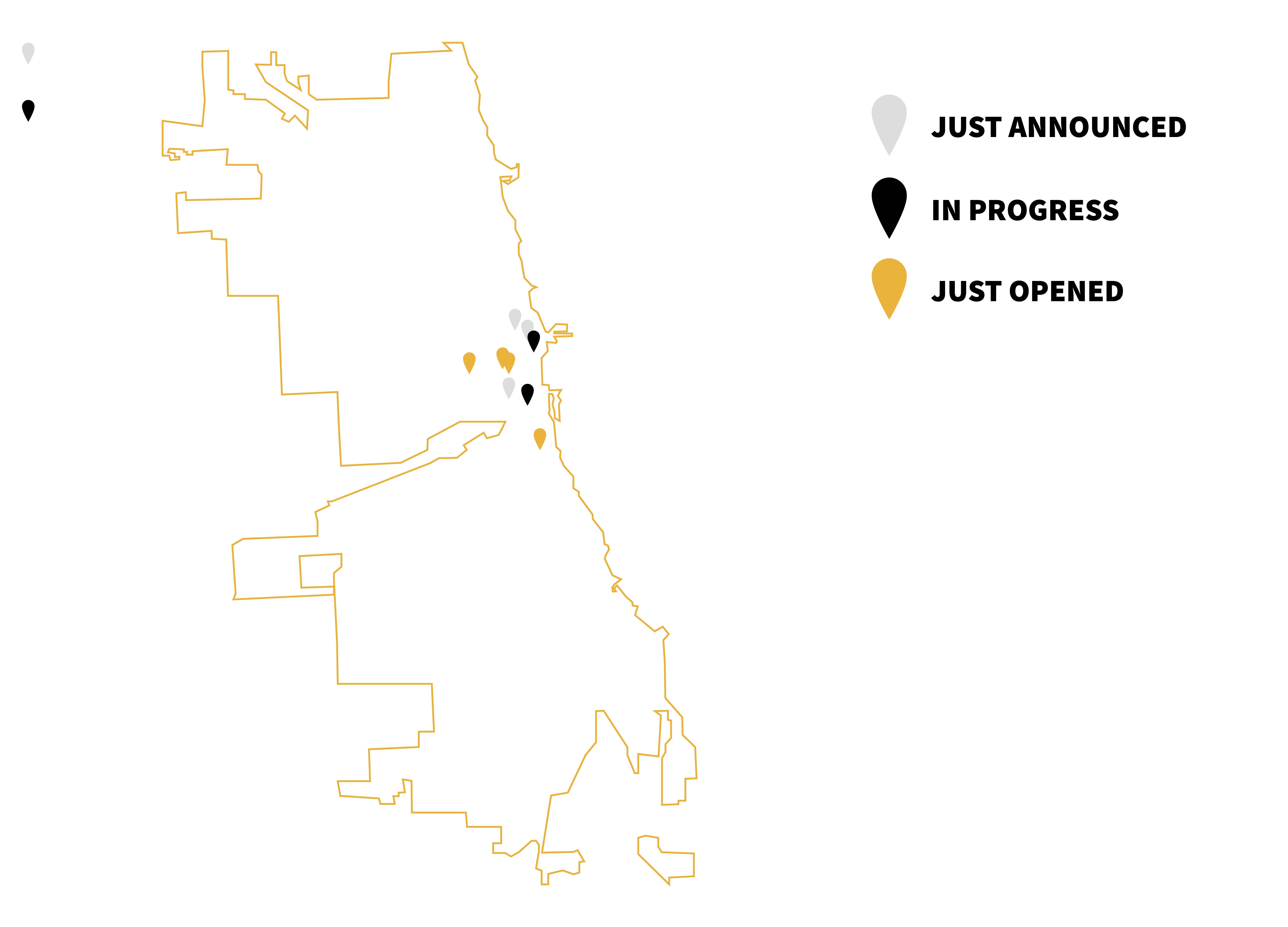 With hundreds of neighborhoods, counting both the official, unofficial, and pocket communities, Chicago is a patchwork of places to live. Lately, several developers have been trying to carve out their own space and add a name to that list.

For example, Belgravia Group received City Council approval for its “Triangle Square” development on a vacant piece of land between Bucktown and Lincoln Park. Instead of throwing in with either of these neighborhoods, the developer is opting to call the area Bucktown East. The project, benchmarked at $200 to $250 million, will bring three new buildings (complete with condos, apartments, retail space, and offices) to the vacant land.

Neighborhoods on the Rise

Douglas Park, mostly known as the host of the annual musical festival Riot Fest, is set to get more attention with a $200 million development. The project, Ogden Commons, will bring approximately 400 homes, restaurants, and office space to the neighborhood. This project, already approved by the Chicago Plan Commission, is a part of the larger Ogden Avenue Corridor Master Plan.

Cabrini-Green, once known as a failed housing project, is getting new townhomes and a large mixed-use development.

Out in the suburbs, big development plans have been announced for Palos Park and Elgin. The Village of Palos Park was able to annex approximately 1,400 acres of land. Preliminary plans envision a golf resort, new single-family homes, and commercial development for the space.

Elgin has released a new comprehensive plan that will shape the suburb over the next 15 to 20 years. The plan includes a focus on downtown and hopes for creating new residential neighborhoods.

Unsurprisingly, some of the many new developments along the Chicago River are vying for neighborhood status. For example, Lakeshore East, situated across the river from Streeterville and north of the Loop, is being built as a master-planned community. Already, a number of luxury residential buildings are complete within the 28-acre development. Developers Lendlease Development and Magellan Development Group are also pitching revised plans for three new towers.

Not far from Lakeshore East, Lendlease opened the first of five luxury buildings in the South Loop. The developer is angling to have those five buildings collectively go by a new neighborhood name: Southbank.

Neighborhoods on the Rise

On the South Side of Chicago, new development is coming to Washington Park. The neighborhood’s Green Line station $50 million makeover broke ground in 2018 as a part of the larger Garfield Gateway project.

Nearby, the University of Chicago and a number of cultural organizations have partnered to create an Arts Block in the neighborhood.

Walkability has long been a feature of urban neighborhoods, but the suburbs are starting to get on board. In the western suburb of Geneva, StreetScape Development is creating an entire neighborhood with walkability in mind. The neighborhood, Hamilton Place, is expected to reach completion in 2020.

While many of the city’s highly anticipated mega developments are years out from being finished, smaller developments are still opening. 900 West Washington, a luxury condo building, officially opened in the West Loop. The condo building features 22 condos, a mix of two- and four-bedroom units, according to the report. Taris Real Estate led the creation and construction of the 10-story building.

900 West is hardly the only luxury building in the ever-popular neighborhood. Other luxury projects, like Hayden West Loop, are also in the works.

Despite losing its bids for Amazon’s headquarters, Chicago is still emerging as a major contender in the country’s tech scene. Google and Apple have a footprint in the city, and Bronzeville is looking to become a technology district. Among the bigger news, a smaller technology project had its unveiling at Navy Pier in Streeterville. In September, the $5 million, 4,000-square-foot Peoples Energy Pavilion opened at the iconic Chicago spot.